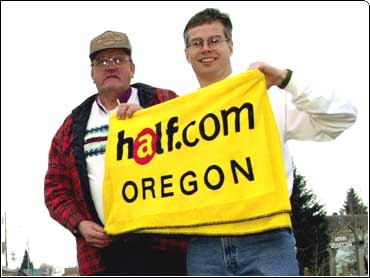 The proudly quirky mountain town of Halfway, Oregon may get an economic shot in the arm by helping put a fledgling Internet company on the map, figuratively speaking, of course.

The City Council voted unanimously Wednesday night to temporarily change the name of the city to half.com as part of a marketing gimmick dreamed up by an online retailer of the same name.

The new name is not official and won't show up on any map, but the Conshohocken, Pennsylvania based startup wants to post a sign on the main road into town that would read: Welcome to the first dot-com city in America, Half.com AKA Halfway, Oregon.

The deal already has brought worldwide notoriety to the company, and could turn out to be a modest money-maker for the town of just over 360 people.

In exchange for renaming itself for the next year, Halfway will receive $75 thousand from the company and get 22 computers donated to the town's elementary school.

It' been amazing, said marketing director Mark Hughes, who has spent much of the past month in Halfway shepherding the deal. We've had calls from media around the world Holland, Japan. We couldn't have imagined anything like this.

Legally altering Halfway's name would take years and require collecting signatures, changing the city charter, redrawing maps and trashing old traffic signs. Instead, the City Council, backed by a majority of the townspeople, accomplished the task by adopting an unofficial proclamation on a 7-0 vote.

It's a good opportunity for both sides, said councilor Merrilyn Seal. Personally, I feel we have made two halves whole.

Halfway was founded in the early 1800s at a spot midway between the towns of Robinette and Cornucopia. Surrounded by snow-covered mountains and streams, and a short drive away from picturesque Hell's Canyon, this little hamlet might seem like paradise. But the town has been ravaged by the decline of once-lucrative industries like mining, logging and ranching.

The new Internet deal could bring new life to the local economy. Half.com has promised to help build and host the city's Web site, offering sites to businesses in the community.

This week, the e-commerce company, which uses its Web site half.com to sell use used books, CDs and videos, put an advertisement in the local newspaper seeking Halfway esidents to follow up on half.com orders by placing promotional calls to customers around the country. Those promises remain rather murky, but they still have the town excited.

Where else could you find a town so warm to represent a new company like this, said bartender Lynne Carey-Melchior, whose great, great-grandfather was the postmaster who helped name Halfway. As it is right now, there's really no chance to work here.

And many business owners in town, who sell everything from fish bait telephant garlic, are eager to jump on the Internet bandwagon and take half.com up on its offer to create their Web sites.

Still, some people are worried that half.com the company is getting a bit too much bang for its buck.

The City Council is giving this town away, said Dale Beatty, who owns a bakery, restaurant and lodge in town. They've got a million dollars' worth of advertising already.

An indignant Al Bainter, a retired Army Corps engineer who moved to Halfway five years ago to get away from it all, put up a sign that said Half Who Cares? outside his home.

I don't think the mayor or the city council know what is going on, he said. Sure, they're getting a lot of attention. But what will they get a few months from now?

Others, however, say the deal won't change who they are or where they're from. I'm still from Halfway, says Mayor Ivan Crow. But mindful of his new role of corporate booster, he corrected himself, I guess that's Halfway - AKA Half.com.