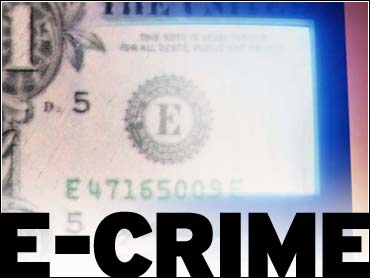 The famed bank robber Willie Sutton, asked once why he robbed banks, replied simply, "That's where the money is."

The money is now online, and that's where the crime is, too.

A graduate student is accused of trying to extort an electronic book publisher. Con artists are cleaning out bank accounts of America Online subscribers.

The graduate student, from Colorado State University, allegedly tried to extort money, a car and free downloads from a New Jersey company that sold digital books over the Internet.

The Wayne-based company, which was not named by federal authorities, received 10 threatening e-mails from an account of Nelson Robert Holcomb in April and May, according to court papers filed by the FBI.

The e-mails said the sender had discovered how to download the books for free and would not reveal the weakness in return for a sum equal to the retail value of the content on the company's Web site, a 2001 Volvo wagon, two digital audio players, and unlimited free downloads of the company's content, court papers said.

Many America Online members are receiving e-mail messages telling them their accounts will be closed if they don't reply or visit a Web site and provide credit card numbers, reports Steve Levine of CBS affiliate WROC-TV.

Dave Christiansen in Rochester, N.Y., received one. "It was professionally done," he said.

It's the electronic equivalent of being herded into a dark alley where you can be robbed.

The site to which Christiansen was referred appeared to be an official AOL site, complte with its logo, but it wasn't. And it broke the AOL cardinal rule of asking members for personal account information.

"If you get an e-mail and it asks for billing and account information, it can look, smell and sound like AOL, but it ain't AOL," said spokesman Nicholas Graham.

"There is no reason in the world an online company would automatically ask you for your billing information," said Internet expert Rick Harby.

WROC-TV traced the site to a woman in Oregon, but when contacted, she claimed not to know anything about it. "Nobody in my house is sophisticated enough to do this," she told the CBS affiliate. "We just read our e-mail."

However, the California company that hosts the Web site says it was her credit card that paid for the site's registration. She says she may have unknowingly provided that information when she answered a fake e-mail similar to the one received by Christiansen.

A similar e-mail scam on AOL offers free gifts or also asks for financial information, but when the subscriber clicks on the link, it obtains the account's ID and password, enabling the thief to hijack the account.

"It's scary," said Christiansen. "People can actually get into your computer, and steal from you electronically."

America Online says if it needs financial information from a subscriber, it either contacts him or her by regular mail, or shuts down the account until the member contacts the company.

One giveaway on most of the scam e-mails: Numerous spelling errors and bad grammar.

After the New Jersey e-book company agreed to provide everything except the money, it got an e-mail the next day from someone who identified himself as Rob Holcomb. The sender gave a mailing address and work phone number at the school's chemistry department in Fort Collins, Colo., court papers said.

Another e-mail from Holcomb's school account said he would be willing to sign a nondisclosure agreement, the papers said.

Holcomb, 36, was arrested at his Fort Collins, Colo., home Wednesday.

Bail was set at $50,000 in federal court in Denver and the judge barred Holcomb from any Internet access and from disseminating information about the company, said Michael Drewniak, a spokesman for the U.S. attorney's office in Newark, where the charges were filed.

Messages left at Holcomb's work number in the chemistry department were not immediately returned Wednesday and the phone at his home rang unanswered.

If convicted of the single charge of using the Internet to send extortion threats, Holcomb could face up to two years in prison and a $100,000 fine.

By Lloyd de Vries
©2000 CBS Worldwide Inc. All Rights Reserved. This material may not be published, broadcast, rewritten, or redistributed. The Associated Press contributed to this report