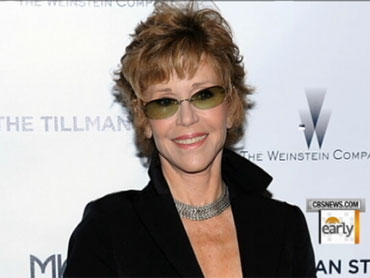 One of America's leading ladies for over 50 years , Jane Fonda -- who's also a fitness guru -- revealed Thursday that she was diagnosed with breast cancer. A symbol of health and agility at the age of 72, Fonda says a small tumor was found a few weeks ago during a routine checkup.

She had the tumor removed earlier this week and is considered "100 percent cancer free," according to her publicist. And, experts say, the news shows again that breast cancer can affect anyone at any age and any fitness level -- and that earlhy detection is crucial.

"Unfortunately, I think it's never is a surprise to hear the latest person diagnosed with breast cancer. The reality is it is a bullet all women have to dodge," CBS News Medical Correspondent Dr. Jennifer Ashton remarked to "Early Show" co-anchor Maggie Rodriguez.

Ashton also points out that most breast cancer is diagnosed in older women, saying, "Seventy-seven percent of cases are found in women over the age of 50 and when you're talking about the 60s, that decade, your chance of getting diagnosed with breast cancer is 1 in 29. Obviously, she's older than that and her risk is higher."

Fonda is yet another example of the value and importance of early detection, discovered during a routine checkup.

According to Ashton, the general guidelines from the American Cancer Society say women 40 and over should be screened with yearly mammograms and have a clinician or clinical breast exam -- every three years when they are in the 20-to-40 years age group and then annually 40 and over.

"So again, this does speak to the importance of screening and finding something earlier rather than later," she said.

Ashton also mentioned there is a trend in breast cancer, in particular, that not all breast cancers necessarily need aggressive treatment. "We'll hear more about that research in the future. But at this point, when you find something, it's treated," she added.

In Fonda's case, they found the tumor before it had spread and they took it out and now she's cancer-free. So does that mean she's out of the woods?

"If you find something that's small, and it hasn't spread to the lymph nodes and is a non-aggressive type of breast cancer, the five-year survival approaches 100 percent," Ashton said. "At this point, it is better to find an early cancer and treat it, but in the future, we'll hear more and more about maybe cancers that never become aggressive and never need aggressive treatment. At this, point she's in such great health that, obviously, being cancer-free is what anyone would hope for."

Fonda's perfect health and fitness is definitely a factor in fighting off cancer as well.

"It's so important, Maggie being in good physical condition will help you diagnosis the with any illness, cancer is no different," she said.

At the end of the month, Fonda will release a new set of fitness DVDs aimed at women her age, just another accomplishment for someone who can now also call herself a cancer survivor.