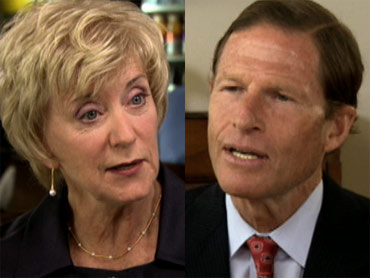 (CBS) While Republicans are projected to rack up seats in Arkansas and Florida, CBS News now projects that Democratic candidate Richard Blumenthal will wrestle a victory from Republican challenger Linda McMahon in the Connecticut Senate race.

It's an important hold for the Democrats. Blumenthal, the state's long time attorney general, is projected to step into the seat vacated by Democratic Sen. Chris Dodd, who did not seek re-election.

McMahon spent about $50 of her personal fortune gained from her days as a professional wrestling executive. Blumenthal spent around $2 million out of his own pocket.

At times the campaign looked like a grudge match. Blumenthal ran TV ads accusing McMahon of being a bad CEO who didn't care about her employees and pouncing on WWE-related issues, ranging from wrestler deaths to raunchy programming.

McMahon was quick to criticize Blumenthal for saying he served in Vietnam, when he didn't.

In the end, Connecticut voters shrugged off the strange misstep and apeear ready to keep the seat for Democrats.