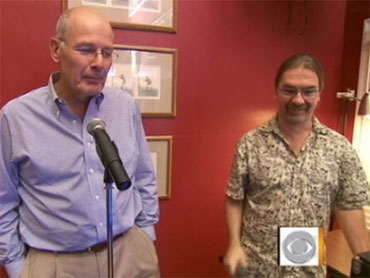 Have you ever been intrigued by another person who shares your same name? Maybe Googled yourself and checked out just exactly who the other people are with the same first and last name as yours?

Well, on "The Early Show," in our "Namesake" series, co-anchor Harry Smith traveled to outside Daytona Beach, Fla., to meet another Harry Smith who, it turns out, lives a very different, but interesting life.

But until now, our co-anchor had never heard of Harry Smith of Deland, Fla.

"So here we are in Florida, and I gotta tell ya -- in my whole life, I have never ever ever ever met another person named Harry Smith. So, well there ya go -- there he is. How ya doing?"

Although they share the same name -- and a love of dogs -- the similarities pretty much end there. Harry lives with his girlfriend more than a thousand miles away and when it comes to hair it's no contest, Florida's Harry
Smith is indeed a harry guy. Plus Harry owns a business. A karaoke business. But it's not just karaoke -- it's "Harryoke!"

Every Friday night, Harry sets up his show in the pub at the Halifax Plantation Country Club. The packed house proved what we had heard -- that Harry is the karaoke king of North Central Florida. And every time Harry Smith picks up a microphone, he knocks 'em dead.

Six nights a week, Harry Smith puts on karaoke shows around Central Florida, and he has legions of fans.

Co-anchor Harry Smith asked one woman, "What do you like most about coming here?"
"Harry," she replied. "Harry is the most amazing karaoke man I have ever met in my entire life, his vocal range, he makes anyone sound good."

Smith said, "You're a Harry groupie?"

And it's easy to see why -- not only does Harry entertain, he makes everyone who takes the stage feel like they are the star.

Speaking of his karaoke, Harry Smith said, "There are people who come out to do karaoke who have miserable lives or have traumatic events happening and for three minutes they forget all that."

For a few hours every night, his patrons -- who have become his friends -- dance and sing their hearts out. And nothing could make Harry happier.

Harry Smith said, "To be able to do something for a living that you probably would do as a hobby anyway and be beloved for it and make a comfortable living, absolutely - that is the American Dream."

And when the time came for co-anchor Harry Smith's turn at the mic, he found out firsthand why his namesake really is the king of karaoke.

When the song was too high for our Harry, the karaoke king stepped in to help right when he needed him the most.

Then everyone joined in.

On "The Early Show," co-anchor Harry Smith said he really enjoyed his time with his namesake.

He said, "It was a blast. It was really a privilege to just hang out with him."