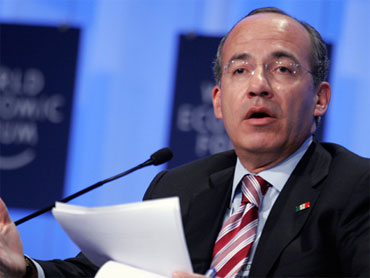 The success of talks this year to salvage a global climate accord hinge on money, Mexico's President Felipe Calderon said Friday, urging executives at the World Economic Forum to pay more to fight climate change.

Despite recent scandals that have invigorated global warming skeptics, Calderon and the U.N. climate chief vigorously defended scientific work showing that sea levels are rising and glaciers melting, with consequences for millions of people and economies worldwide.

Calderon will host the U.N. climate summit in Cancun at the end of the year, which hopes to improve on the failure last month in Copenhagen to produce a binding accord limiting carbon emissions.

Congress Went to Denmark, You Got the Bill

"The economic costs associated with trying to tackle climate change" are central to the challenges facing governments, he said.

"We need to try to learn from our mistakes in Copenhagen," Calderon said in Davos. "If we can find an economic mechanism ... we will be on track."

Rich and developing countries clashed at Copenhagen over how much, and how, each should contribute to battling global warming. At the end, the key emerging economies of Brazil, South Africa, India and China brokered a political accord with President Barack Obama and they will play a key role in shaping what the U.N. hopes will be a legally binding climate deal by the end of the year.

As countries shakily emerge from recession, a key part of the debate is ensuring that progress is environmentally effective but also won't break the bank.

"In the private sector, we need clear targets," said Renault-Nissan head Carlos Ghosn, who has championed electric cars. He encouraged cooperation among governments and the private sector for a climate accord and for fixed emissions targets and prices for emitting carbon gases.

Yvo de Boer, head of the U.N. Framework Convention on Climate Change, told The Associated Press that recent scandals over climate data have not discredited the scientific evidence that global warming exists and must be countered.

"What's happened, it's unfortunate, it's bad, it's wrong, but I don't think it has damaged the basic science," he said in an interview late Thursday.

Global warming skeptics have expressed anger after a U.N. report warning that Himalayan glaciers could be gone by 2035 turned out to be off by hundreds of years because of a typo - the actual year was 2350 - and over stolen e-mails from the University of East Anglia's climate science unit.

"Concluding that the Himalayan glaciers are going to disappear later is like being happy about the fact that the Titanic is sinking more slowly than we had originally feared, even though it's still going to sink," de Boer said.

De Boer expressed confidence that the business leaders at Davos, who are starting to enjoy an economic recovery after a rough couple of years, would invest anew in renewable energy.

"Energy sector investments that were put on hold because of the crisis are beginning to be made again," he said. "I think people will take future climate change policy into account."

Also Friday, Microsoft founder Bill Gates was speaking about how to better target global development aid and was expected to announce new funding to bring vaccines to poor countries.