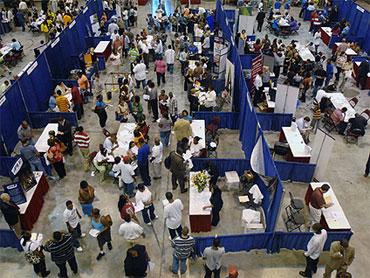 Employers who have cut jobs over the past year are in no hurry to start hiring again just because the recession is tapering off.

From a North Carolina machine maker to an Oregon heating-and-cooling company, small business owners say they need to see several months of rising sales before they start adding staff.

Because labor is the biggest expense for most companies, that kind of caution is typical at the end of recessions. After the last one, in 2001, unemployment kept rising and didn't peak until June 2003 — 19 months into the economic recovery.

This time around, some economists say unemployment may not return to healthy levels until 2013. Companies have been slashing workers' hours, squeezing more work out of the employees who are left and relying on cheaper temporary staffers to fill the gaps.

In North Carolina, a company called Power Curbers, which makes barriers and curbs for subdivision, is finally breaking even after shedding 35 percent of its staff. The owner, Dyke Messinger, plans no more cuts.

Yet he is wary of adding to the staff, which now numbers about 80. First he wants to see new orders.

"When you look out and see that the country has stabilized, that gives you confidence that you can hold on to everybody that you've got," he said. "But we will be very hesitant to hire until business turns up."

Employers wiped out 247,000 jobs in July, far fewer than any other month this year. The economy shrank in the second quarter at a much slower pace. And businesses are seeing real results of a warming economy. But that doesn't translate into job creation.

William Dunkelberg, chief economist for the National Federation of Independent Business, said a survey of small businesses found only about 7 percent of them added to their work forces in the second quarter of the year, while 24 percent cut jobs.

At the Three Monkeys restaurant and bar in St. Louis, customers show up more often for the Sunday brunch buffet and for drink specials. It's a lot better than last winter, when people were canceling parties and staying home.

Still, it would take about 25 percent more business for owner Stephanie Demma to consider adding to her staff of 40. Otherwise, higher payroll expenses would cut too deeply into profits.

"We've been doing well, but then again there haven't been any big gains," Demma said. "We're staying steady."

Hiring should start again late next year, said Sophia Koropeckyj, managing director for Moody's Economy.com. It's got a long way to go: The recession has eliminated 6.7 million jobs, and 14.5 million workers are unemployed and unable to find work.

When the economic crisis struck last fall, many employers steeled themselves for the worst, laying off workers, cutting hours, imposing unpaid furloughs and cutting benefits.

Now that economy is beginning to recover, some companies will find there are cheaper alternatives to bringing in new full-time workers. For example, they can increase the hours worked by the employees they already have. Right now, the average workweek is 33.1 hours, near a record low.

More significantly, businesses in this recession have managed to produce just as much with fewer workers. From April through June, productivity surged by the largest amount in nearly six years, the government said Tuesday.

When business are producing as much or more with fewer people, that makes the job market even more dismal for the unemployed.

George Brown has been forced to cut back on the hours of the maid at the two guest houses he runs on Chicago's North Side, where occupancy is down 10 percent. She now works 25 hours a week instead of 40.

Brown said he will not raise her hours until his lost revenue comes back. "I'm happy with the progress" of the national economy, he said. "But I don't think it's affecting my business yet."

Once the economy starts adding jobs again, employers who depend on battered industries like housing will probably be among the holdouts.

"Everyone's afraid to spend even $1,200 on a scooter," said Tyree, who laid off a salesman there recently and had to fill in on the sales floor himself.

And a month or two of hopeful economic news doesn't impress Teresa Penhall, who runs a small heating-and-air company called Absolute Comfort in Klamath Falls, Ore. The housing collapse forced her to lay off two workers. Now, it's just Penhall and her husband.

The workload would have to double before the company hires again, Penhall said. But she doesn't see much demand for big work these days — just modest repair jobs on old air conditioners.

"People are calling us — not by choice but because they are hot," she said.