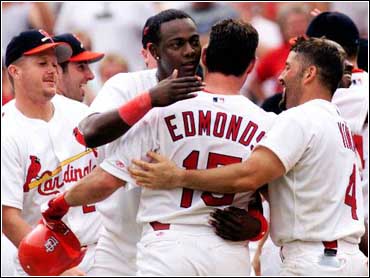 Edmonds hit his second game-winning home run against the Mets in three days Sunday, connecting in the 11th inning as the St. Louis Cardinals completed a three-game sweep with a 4-3 victory.

"It's been awhile since I've done that, and to do it twice in a week, it's been nice," Edmonds said. "This whole year has been perfect except for the month of August. I'm in heaven."

The NL Central-leading Cardinals have won seven of eight, are a season-best 20 games above .500, and are 5-0 in extra innings. The Mets swept St. Louis twice earlier in the season, but lost all three games of this series by one run on the final at-bat.

"They had to prove they can beat us, and they did everything they had to do this series to win three close games," manager Bobby Valentine said. "But I think we're 6-3 (against St. Louis) for the season."

Edmonds hit a ninth-inning homer on Friday, and Fernando Vina hit a game-winning single on Saturday.

On Sunday, Edmonds led off the 11th by hitting a 1-1 pitch from Rick White (5-8) over the right field wall for his 38th homer. White was in his fourth inning of relief.

"He threw me two sliders and I didn't know what to expect after that," Edmonds said. "The way things have been going, I wasn't trying to do too much."

Edmonds, who also singled in the first, hit .188 in August, and is batting .238 since Mark McGwire left the lineup on Jul6.

Matt Morris (3-3) allowed two hits in two innings. He got Mike Piazza to ground into an inning-ending double play after singles by Mike Bordick and Edgardo Alfonzo in the 10th, and retired the side in order in the 11th.

Cardinals manager Tony La Russa tried to finesse the ninth with a two-run lead, using three pitchers, but Bubba Trammell foiled the strategy with a two-out, two-run homer to tie it 3-3.

Trammell, who also drove in the Mets' first run in the fifth, hit a 2-1 pitch from Dave Veres over the wall in left center for his third homer since joining New York from Tampa Bay.

"If Jimmy (Edmonds) was real good, he goes up and catches it," Veres joked.

Pinch-hitter Placido Polanco's three-run homer in the eighth had given the Cardinals the lead. Polanco hit his fourth home run on an 0-1 pitch from Dennis Cook after Turk Wendell walked Edgar Renteria and gave up a hit-and-run single to Mike Matheny to open the inning.

"It was a great at-bat," Polanco said. "They came back but we've got Jim, and he did it again."

Cook retired only one of the four batters he faced in the seventh inning on Friday as the Cardinals tied the score in an eventual 6-5 victory.

New York remained a half-game behind NL East-leading Atlanta, which lost 9-3 to Houston.

Glendon Rusch allowed four singles in seven scoreless innings for the Mets. He struck out seven and didn't walk a batter for the ninth time in 25 starts.

"I ran out of gas a little bit towards the end," Rusch said. "But I'll take a 1-0 lead into the eighth inning with our bullpen coming in anytime. There's no way you can fault them for a rough outing."

Cardinals rookie Rick Ankiel also was dominant despite the 98-degree heat, allowing one run and two hits in seven innings to match his season-best outing. Ankiel was perfect over the first three innings, recording six of his eight strikeouts.

Ankiel has earned the win in only two of his last 13 starts, but the Cardinals have won his last six outings.

A misplay by Cardinals first baseman Craig Paquette helped the Mets score in the fifth. Paquette hesitated with the ball when Ankiel had Jay Payton picked off first with two outs in fifth.

Payton ended up with a stolen base and scored on Trammell's hit, the first of the game for the Mets.

"I hung a curve," Ankiel said. "I shouldn't have done that."