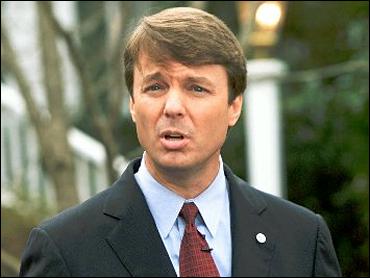 Democratic presidential candidate John Edwards returned donation checks sent by employees of an Arkansas legal firm for $10,000 in campaign donations after a law clerk said her boss promised to reimburse her contribution.

Campaign donors are not allowed to funnel donations through someone else under federal law. Otherwise, donors could exceed the legal contribution limit for individuals, recently raised to $2,000 from $1,000 per election.

Law clerk Michelle D. Abu-Halmeh told The Washington Post that her boss, Little Rock attorney Tab Turner, asked people to support Edwards and assured them they would be reimbursed.

Edwards spokeswoman Jennifer Palmieri said the campaign decided to return the money after the reporters uncovered the situation.

"It's important to Senator Edwards that his campaign operate under the highest federal standards," she said. Palmieri noted Edwards goes beyond the federal law by refusing to take donations from political action committees and federal lobbyists.

Palmieri said at the time they contribute, donors are given instructions that explain they cannot be reimbursed, along with other federal guidelines for donations. She said Friday that the campaign will now send a follow-up letter after donations are received to remind donors of the law a second time.

"It's an unfortunate yet not an uncommon occurrence with the amount of money involved with presidential campaigns that sometimes checks have to be returned," she said.

Edwards raised $7.4 million in the first quarter, the most of the nine Democrats running for the presidential nomination.

Four law clerks at Turner's firm each gave Edwards $2,000, according to the Post's analysis of his campaign disclosure report. One clerk reached by the paper, Diana Harcourt, initially indicated she was to be reimbursed. She put the call on hold, then returned and said she didn't want to discuss it and ended the conversation.

Turner, who has made millions suing automakers and tire manufacturers on behalf of victims of traffic accidents, told the Post in an e-mail that he would not reimburse his clerk.

"She apparently cannot be reimbursed under some rule relating to campaign finance," he wrote.