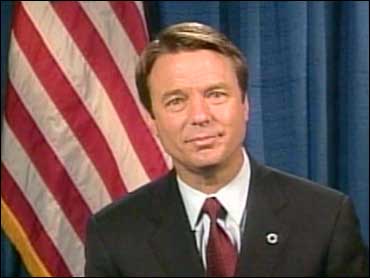 With the presidential election too close to call, the candidates are continuing to push for votes in swing states until the polls close.

"Young voters benefit us. I don't think there's any question about that," says Edwards, speaking from Ft. Lauderdale, Fla. "They've changed this country before and could change this country again. If those folks participate and there is a big turnout, we feel very optimistic."

Edwards says he is very confident that Democratic supporters will go and vote. "Our voters are very motivated, passionate." He says the crowds he's seen are "very excited, very organized."

Edwards predicts a clear victory. "2000 was an unusual situation," he says. "I think late tonight, early tomorrow morning, we will know who the next president is."

After a whirlwind tour of Florida, Edwards will join Sen. John Kerry, the Democratic presidential hopeful, in Boston tonight. Kerry, meanwhile, is stumping in Wisconsin, where Vice President Dick Cheney is expected later today. President Bush will appear in Ohio.