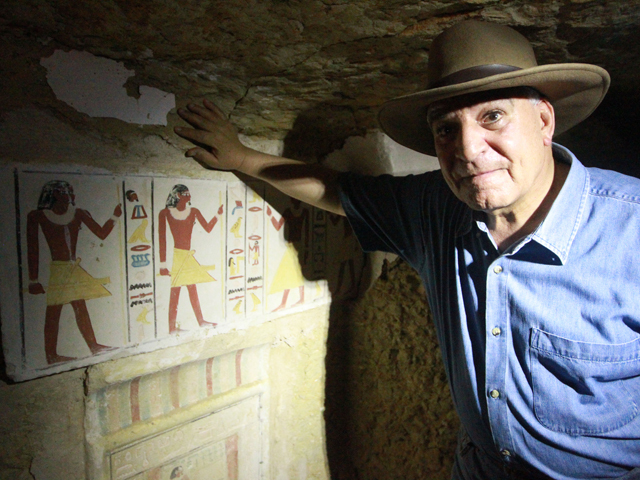 CAIRO - Egypt's antiquities minister, whose trademark Indiana Jones hat made him one the country's best known figures around the world, was fired Sunday after months of pressure from critics who attacked his credibility and accused him of having been too close to the regime of ousted President Hosni Mubarak.

Zahi Hawass, long chided as publicity loving and short on scientific knowledge, lost his job along with about a dozen other ministers in a Cabinet reshuffle meant to ease pressure from protesters seeking to purge remnants of Mubarak's regime.

"He was the Mubarak of antiquities," said Nora Shalaby, an activist and archaeologist. "He acted as if he owned Egypt's antiquities, and not that they belonged to the people of Egypt."

Despite the criticism, he was credited with helping boost interest in archaeology in Egypt and tourism, a pillar of the country's economy.

But after Mubarak's ouster on Feb. 11 in a popular uprising, pressure began to build for him to step down.

Hawass was among a list of Cabinet ministers protesters wanted to see gone because they were associated with the former regime.

And archaeology students and professors blasted him for what they saw as his lack of serious research.

Shalaby said Hawass didn't tolerate criticism. She said most his finds were about self-promotion, with many "rediscoveries" in search of the limelight.

Hawass prided himself in being the "keeper and guardian" of Egypt's heritage. He told an Egyptian lifestyle magazine, Enigma, in 2009 that George Lucas, the maker of the "Indian Jones" films, had come to visit him in Egypt "to meet the real Indiana Jones."

Hawass, 64, started out as an inspector of antiquities in 1969 and rose to become one of the most recognizable names in Egyptology. He became the general director of antiquities at the Giza plateau in the late 1980s, before being named Egypt's top archaeologist in 2002.

In one of Mubarak's final official acts as president, Hawass' position was elevated to that of a Cabinet minister. After Mubarak's ouster, Hawass submitted his resignation but he was reinstated before finally being removed Sunday.

His name has been associated with most new archaeological digs in Egypt, with grand discoveries such as the excavation of the Valley of the Golden Mummies in Bahariya Oasis in 1999 and the discovery of the mummy of Egypt's Queen Hatshepsut almost a decade later.

He was also a staple on the Discovery Channel, which accompanied him on the find of Hatshepsut's mummy. He started his own reality show on the History Channel called "Chasing the Mummies." The channel introduces him as "the man behind the mummies."

Hawass has long campaigned to bring home ancient artifacts spirited out of the country during colonial times. He said since he became top archaeologist, he managed to recover 5,000 artifacts. In January, just before anti-government protests erupted, he formally requested the return of the 3,300-year-old bust of Queen Nefertiti that has been in a Berlin museum for decades.

Hawass also had a fashion line, including his hat, for which he organized a photo-shoot in the Egyptian Museum, something that drew the ire of many archeologists.

"He was a personality created by the media," said Abdel-Halim Abdel-Nour, the president of the Association of Egyptian Archeologists.

He said many campaigned for Hawass's removal, including on Facebook and in Tahrir Square, the center of Egypt's protests. Just before news of his departure, Hawass was heckled near his office Sunday as he left on foot. Protesters tried to block his way, until he jumped into a taxi to get away from the melee, the taxi driver, Mohammed Abdu, said.

Hawass was replaced by Abdel-Fattah el-Banna, an associate professor in restoration. He was frequently present in Tahrir Square during the protests.