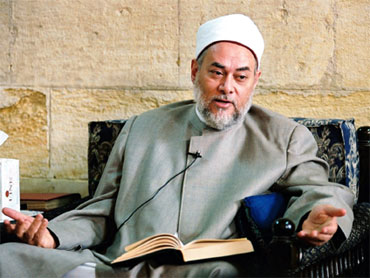 Egypt's top cleric wants Muslims to answer the call to prayer, but not when it's ringing on their cellphones.

Grand Mufti Ali Gomaa issued a fatwa, or a religious edict, on Wednesday urging Muslims to do away with a popular fad - Quranic verses or the five daily calls to prayer as cellphone ringtones. The government-appointed cleric says such ringtones are inappropriate, misleading and demeaning to God's words.

"God's words are sacred. ... He ordered us to respect them and glorify them," Gomaa said.

Muslims are required to pray five times a day, and the time for this is announced solely with calls to prayers from mosques, Gomaa said. "The calls to prayer are to announce it is time ... using it as a ringtone is confusing and misleading."

Edicts, or fatwas, serve as advice for the pious who observe them closely. Gomaa's edict, published on the official web site of Dar al-Iftah, one of Sunni Islam's earliest institutions for interpreting religion, is not binding.

Islamic ringtones are ubiquitous in this country of 80 million. They are also making the rounds in Baghdad, Saudi Arabia, the West Bank and to a lesser degree, multi-sectarian Lebanon. A group of Saudi clerics recently made a similar plea to Saudis not to use Quran for ringtones.

In Egypt, verses or calls to prayer from the holy book of Quran are not only popular as ringtones. They have become the rage with screen savers and text messages in holiday greetings. The tones can be downloaded from the Internet, mobile phone company Web sites and are advertised on TV stations.

With a rising tide of Islamic conservatism, Egyptians are increasingly peppering their lives with religious symbols, and turn to fatwas to regulate their day-to-day lives.

Head scarves are predominant among the country's Muslim women and men increasingly sport traditional beards. Quranic verses can be seen plastered as posters or stickers on cars, offices and homes. Even daily greetings have become Islamized, with people starting and ending their conversations by invoking God's name or words.

The majority of Egyptians are Sunni Muslims. There are nearly 50 million mobile phone subscribers.

For those insisting their ringtones have an Islamic character, he suggested they use Islamic hymns or religious prose.