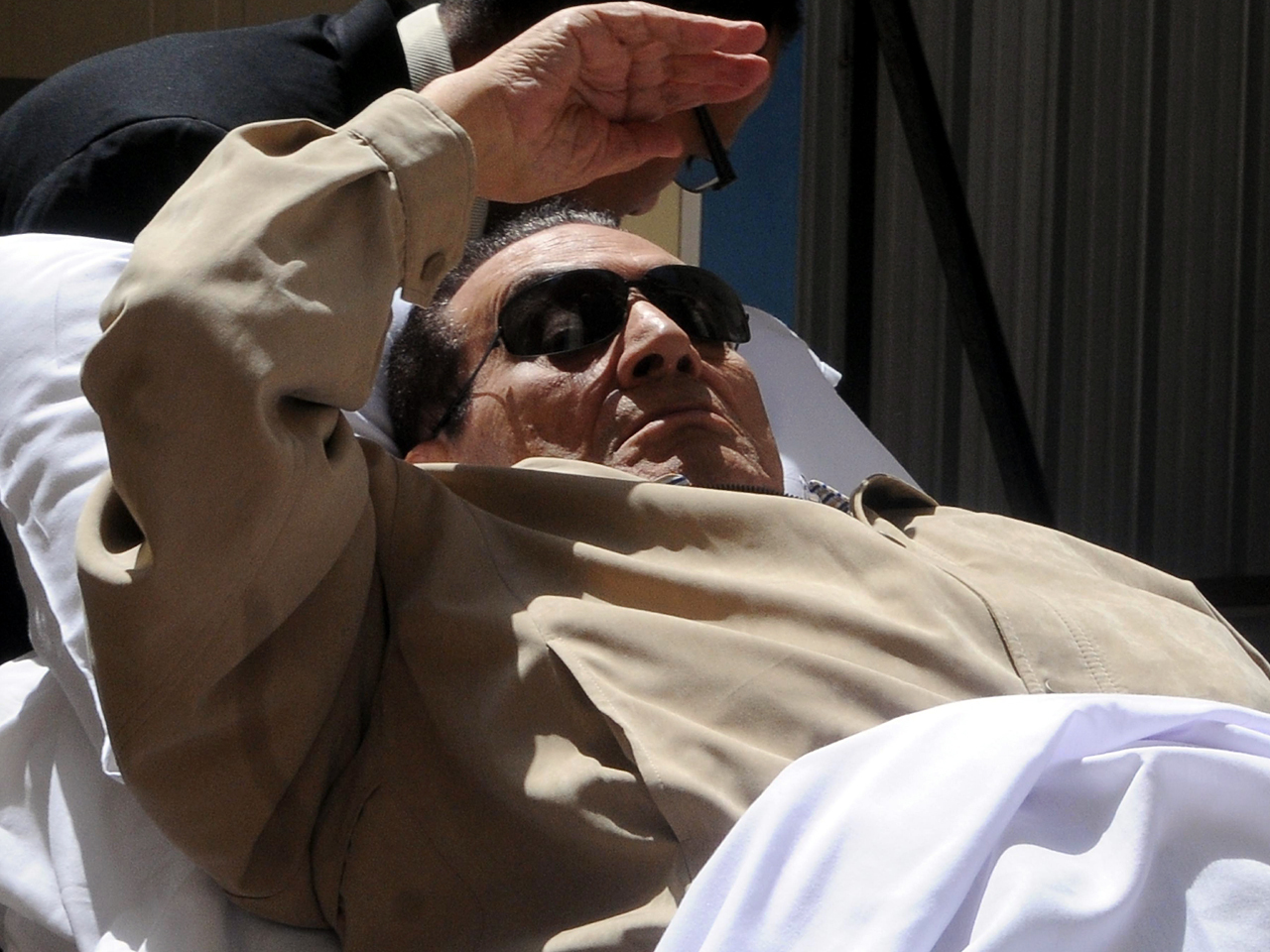 (AP) CAIRO - Hosni Mubarak's condition has deteriorated so much that doctors at the Cairo prison where he is serving a life sentence had to constantly administer oxygen to him overnight, security officials said Thursday.

The officials at Cairo's Torah prison said 84-year-old Mubarak is suffering breathing problems, high blood pressure and depression. He did not speak to his doctors or anyone else except for a few words to his son and one-time heir apparent Gamal, who is being held in the same prison and was at his father's side, said the officials, who spoke on condition of anonymity because they were not authorized to speak to the media.

They said Mubarak was given oxygen throughout the night and until Thursday morning.

Security officials say Mubarak's health has deteriorated sharply since Saturday, when he and his ex-security chief were sentenced to life in prison for failing to prevent the killing of protesters during the uprising that toppled him last year.

Mubarak had been held in military hospitals from his arrest in April last year up until his sentencing. He did not want to go to the Torah prison hospital after the sentencing Saturday, pleading with his escort to take him back to the military hospital east of Cairo where he had stayed in a suite since his trial began in August. Before that, he was held in a hospital in the Red Sea resort of Sharm el-Sheikh.

Mubarak and his two sons were acquitted of corruption charges in Saturday's mixed verdict. But they are being held in prison on new charges of insider trading, brought just days before their acquittals were announced in the separate case with their father.

The acquittals brought harsh criticism from the Islamist-dominated parliament and set off a new wave of mass protests in Cairo's Tahrir Square and other cities. The turmoil erupted two weeks before Egypt's presidential runoff on June 16-17 pitting Mohammed Morsi of the Brotherhood against Mubarak's last prime minister Ahmed Shafiq in a presidential runoff vote.

On Thursday, one of the country's top judicial officials, chairman of the union of judges Ahmed el-Zind, responded to criticism from parliament with a scathing attack. In a televised news conference, el-Zind said it was unacceptable to question the integrity of judges and accused lawmakers of abusing their immunity.

"You did not inherit Egypt from your mothers and fathers," said el-Zind, whose attack appeared to be directed against the Muslim Brotherhood, a fundamentalist group whose supporters won just under half of the legislature's seats. "We will never allow this legislature to be a thorn in Egypt's side," he added.

El-Zind's attack adds to the woes of the Brotherhood. The fundamentalist group is at odds with the ruling military council that took over from Mubarak, in part over the selection of a 100-member panel to draft a new constitution. The generals have given the legislature a 48-hour ultimatum, which expires later on Thursday, to agree on a new selection process.

The generals' action came after the Brotherhood had packed the panel with Islamists, who account for about 70 percent of all seats in the chamber. A court order disbanded that panel and efforts to form a new one have been deadlocked.

The Brotherhood, whose popularity has dramatically declined since parliamentary elections about six months ago, is also at odds with liberals, leftists and Christians who accuse the group of seeking to monopolize power.

The legislature, meanwhile, is faced with the prospect of being dissolved.

Leaks published in the media Thursday said a panel of legal experts has recommended to the country's highest court that an election law that regulated the parliamentary elections was illegal. The recommendation upheld a ruling to that effect by a lower court. If the Supreme Constitutional Court adopts the recommendation in a session scheduled for June 14, parliament will be dissolved, robbing the Islamists of their biggest prize since the ouster of Mubarak.

The court is also to look into and possibly rule on whether Shafiq is eligible to run in the same hearing.

The media leaks say the same experts have recommended to the court that a law adopted by parliament last month to bar Mubarak regime officials from running for office was unconstitutional, meaning that Shafiq can continue in the race.