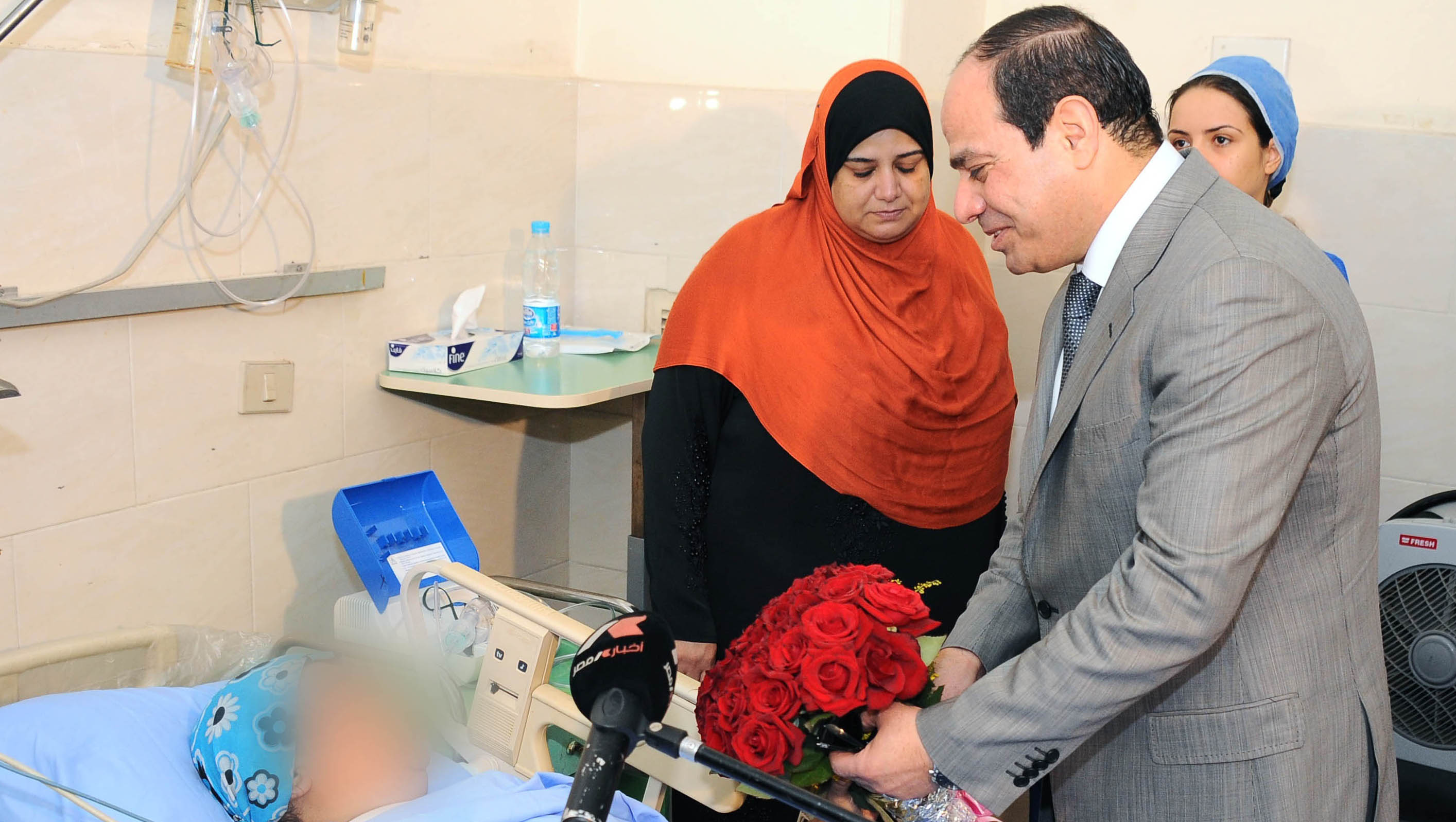 CAIRO - After a wave of public outrage swept Egypt over the latest incident of mass sexual assault, on Wednesday the president came bearing flowers.

Newly elected President Abdel Fattah el-Sissi took an unusual step for Egyptian strongmen: He visited one of the victims.

Egyptian state television cameras followed the president as he visited a military hospital and met with a woman who was attacked by a mob during celebrations marking his inauguration.

The video shows el-Sissi entering the woman's hospital room holding a bouquet of red roses. He stands over her hospital bed, flanked by military aides and hospital staff members. Her face is blurred out.

"I have come to tell you that I am sorry, " el-Sissi tells her. "I am apologizing to every Egyptian woman."

Camera shutters click and flash bulbs blink. He continues, "We as a nation will not allow this to happen again."

This assault is similar to what has happened countless times before: As thousands gathered in Cairo's Tahrir Square at night, men surrounded women and sexually assaulted them.

But the difference in this case is that the attack Sunday night was captured on amateur video. The graphic video shows the woman naked, bloody and bruised. The clip was posted on YouTube and quickly went viral.

It's not the only video clip sparking public outrage. Also captured on video the same night was a live TV segment showing how Egyptian society typically and dismissively reacts to such assaults.

From a balcony overlooking Tahrir Square in downtown Cairo, where thousands of Egyptians had gathered Sunday evening to celebrate el-Sissi's inauguration, a correspondent from the private channel Al-Tahrir described the celebrations in glowing terms but mentioned that there have been some "isolated incidents of sexual harassment."

The female anchor, Maha Al-Bahnasawy, broke in from the studio. "Well, they're enjoying themselves!" She then chuckled. "The people are having fun."

That too went viral. Bahnasawy has since been suspended by her satellite channel.

The authorities have noticed the public anger. Wednesday's visit appeared to be a carefully crafted photo opportunity to demonstrate that el-Sissi, less than a week into his presidency, is responding forcefully to the latest wave of mass sexual assaults.

It follows statements issued by the office of the presidency that condemned the attack. The week before el-Sissi's inauguration at the presidential palace, interim President Adly Mansour issued an amendment to the Egyptian penal code that toughened penalties and lengthened jail sentences for those found guilty of sexual harassment and assault.

But this isn't an isolated incident. Sexual harassment and assault in Egypt has been endemic for years. A report from the United Nations Entity for Gender Equality and the Empowerment of Women says that 99.3 percent of Egyptian women say they have been sexually harassed.

And though el-Sissi in his hospital visit asked police and military forces to combat what his has office called "conduct alien to the best principles of Egyptian society," Egyptian security forces have sometimes been the perpetrators.

Human rights organizations and activists have said that authorities have done little to prevent mass sexual assault. El-Sissi himself previously publicly defended the Egyptian military's controversial performance of "virginity tests" on detained female demonstrators in 2011, seen by rights groups as another form of assault.

In what could be a signal that the authorities are now pushing harder to curb the phenomenon, prosecutors on Wednesday charged an Egyptian public transport worker with harassing two French women in the streets of downtown Cairo.

But the question remains: Will the latest public posturing of Egyptian authorities actually translate into action that makes the streets and squares of Egypt safer for women?