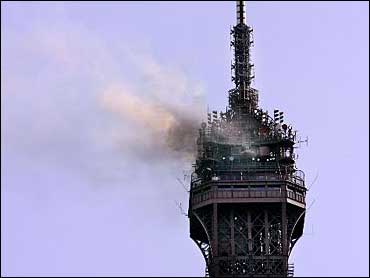 Tourists gazed in disbelief as plumes of gray smoke poured from the top of the Eiffel Tower, forcing the evacuation of thousands of startled visitors to the Paris landmark.

A fire broke out at the top of the tower around 7:20 p.m. Tuesday. As many as 100 firefighters were summoned to fight the flames in the telecommunications room.

Fire Cmdr. Christian Decolloredo says the fire was out within an hour and no one was injured.

The fire was on the third floor, at 905 feet - the highest level accessible to tourists - in an area that is sealed off from the public. A short circuit is suspected as the cause of the blaze.

Hundreds of tourists gathered in the grassy park below the cordoned-off monument or on the nearby bridge over the Seine River to gawk at the smoke. Doctors were on hand, but the evacuation "was carried out in absolute calm," said Paris Police Chief Jean-Paul Proust.

As night settled on the City of Light, the 20,000 sparkling bulbs that weave through the iron lattice work were turned on for the usual 10-minute hourly show.

The tower was to be reopened at least partially Wednesday, according to France-Info radio.

"The lady on fire," marveled Mikael Ceder, a Swede living in Frankfurt, Germany, who arrived with his wife and two children to visit the Eiffel Tower only to find it surrounded by police.

"This really was not the way we planned it," he said. "It's very, very disappointing."

Asterio Sousa, a Portuguese tourist, said the third level "was crowded" when he visited it, just before the fire was declared.

"We had just come down. The smoke was coming out and it smelled," he said. "As we got out, a lot of security people for the tower were running."

"I was at the top level with a friend of mine, and we started smelling some kind of bad smell," said tourist Ivan Dosso, an Ivory Coast native who now lives in Atlanta. "I'm so distraught. "I'm glad they were able to stop it."

The Eiffel Tower has had more than 200 million visitors since it opened at the Paris Exhibition in 1889. It draws 6 million visitors a year, making it the world's most popular paying tourist attraction.

Last month, after nearly a year of rewiring, tower operators began switching on 20,000 decorative light bulbs on the structure every night.

Ceder, the Swedish tourist, said he had no fears for the fate of the Eiffel Tower.

"You'd have to do much more than that to wreck this piece of iron," he said. "I think it will last forever."