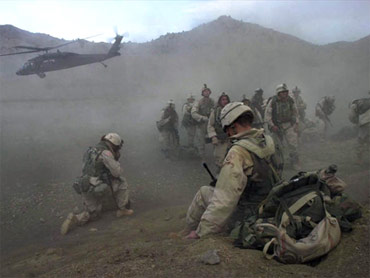 This story is by CBSNews.com political reporter Brian Montopoli.


It was supposed to be swift and decisive response to the Sept. 11 terrorist attacks: Operation Enduring Freedom, the U.S. led invasion of Afghanistan, launched less than a month after the attacks and designed to destroy al Qaeda and the Taliban government that harbored the group.

Eight years later the conflict continues -- and the endgame seems elusive. Insurgent Taliban forces have gained ground; coalition troop casualties have steadily risen; and Americans have grown increasingly weary of the war, which some critics have begun to describe as a potential quagmire.

Criticism of U.S. policy on Afghanistan from the president's own party, meanwhile, has grown louder. Wisconsin Democratic Sen. Russ Feingold is calling for a "flexible timetable" for bringing the troops home, arguing that "we've become embroiled in a nation-building experiment that may distract us from combating al Qaeda and its affiliates." House Appropriations Committee Chairman David Obey of Wisconsin, another Democrat, said Congress could cut war funding in the spring if things haven't gotten significantly better.

And the criticism is not confined to the left. Last week, conservative columnist George Will offered a much-discussed column calling for the U.S. to pull troops out of Afghanistan and instead "do only what can be done from offshore, using intelligence, drones, cruise missiles, airstrikes and small, potent Special Forces units."

Other prominent Republicans, it should be noted, have been more supportive of the current policy: On Tuesday, in an illustration of the sometimes upside-down politics of Afghanistan, William Kristol, Sarah Palin, Karl Rove and others signed onto a letter backing President Obama's strategy.

Mr. Obama has already ordered the deployment of 21,000 additional troops to Afghanistan by the end of the year, bringing the U.S. total to 68,000 and the coalition total to 110,000. The administration has sent signals that a further increase might come in a few weeks following a formal recommendation from Gen. Stanley A. McChrystal, the U.S. military commander in Afghanistan, who last week offered the White House an assessment of the situation on the ground.

"Our goal is clear: to disrupt, dismantle, and defeat Al Qaeda and their extremist allies," the president said last month, calling the war "fundmental to the defense of our people."

"That goal will be achieved, and our troops will be able to come home as Afghans continue to strengthen their own capacity and take responsibility for their own future," he said.

The prospect of deploying additional troops to achieve that goal, however, isn't going over well with many Americans. Support for increasing U.S. troop levels in Afghanistan is declining. A CBS News poll last week found forty-one percent of Americans want troops to start coming home, up from 33 percent in April and 24 percent in February. Support for increasing the number of troops in Afghanistan dropped from 39 percent in April to just 25 percent now.

"I don't think there's a great deal of support for sending more troops to Afghanistan in the country or in the Congress," House Speaker Nancy Pelosi said on Thursday.

The Obama administration has argued that its Afghanistan strategy - which places a priority on clearing the Taliban from population centers and establishing effective local government and services - needs time to work. But while that approach has been lauded by many military observers, it amounts, in the words of New York Times columnist Thomas Friedman, to "State Building 101 in the most inhospitable terrain and in one of the poorest, most tribalized, countries in the world."

It's a country beset by problems related to rampant opium production. Although cultivation is down from last year, 90 percent of the world's supply of the raw ingredient for heroin is grown in Afghanistan, and a U.N. report last week said the country now has drug cartels.

In addition, the U.S.-backed national government is widely believed to be rife with corruption - and Americans are now trying to determine how to handle allegations of fraud in the recent election where results currently show President Hamid Karzai won reelection by a large margin.

It's surely not lost on Obama administration officials that Afghanistan has become known as "the graveyard of empires" - a place where foreign powers have failed to impose order for 2,000 years. A group of former intelligence officials and other experts suggested to Nicholas Kristof that adding troops in the south of the country "may only galvanize local people to back the Taliban in repelling the infidels."

"President Obama and his advisors, both military and political, want to do all that they can to create a democratic government in Afghanistan to prevent it from becoming a center again for terrorism, the home of al Qaeda," said Jere Van Dyk, a Senior Fellow at the Carnegie Council and CBS News consultant who covered Afghanistan as a reporter for the New York Times. "But it's going to be far more difficult, based upon my experience, than anyone can imagine. It is not going to be easy."

Van Dyk said it "will certainly take much longer than one year" for the United States to achieve anything resembling success in Afghanistan. According to Defense Secretary Robert Gates, however, if the U.S. has not shown clear progress by next summer, the public perception will be that the conflict is unwinnable.

"After the Iraq experience, nobody is prepared to have a long slog where it is not apparent we are making headway," Gates said an in interview with the Los Angeles Times in July. "The troops are tired; the American people are pretty tired." The following month, August, was the deadliest yet for U.S. troops in Afghanistan, with 52 casualties.

As for the Afghans, they're "sitting on the fence," according to Van Dyk. "They're going to go with which side is winning. They want peace, they want security, and that is it."

All this leaves Mr. Obama, whose promises of a renewed focus on Afghanistan during the presidential campaign were often drown out amid the debate over Iraq, in an extremely difficult position. Adding troops may be the only way to secure the country, but there is little public support for doing so - and it could backfire. Bringing them home could mean that Afghanistan again becomes a state sponsor of terror, one capable of unleashing an attack like the one that took nearly 3,000 American lives eight years ago.

This week the leaders of France, Britain and Germany called for a conference to take stock of the situation in Afghanistan and "evaluate the challenges that lie ahead." Anti-war sentiment is strong in all three countries, especially Britain, renewing questions about how long the current coalition can hold.

At home, meanwhile, the administration has for a list of benchmarks it can use to determine whether its Afghan strategy is working by Sept. 24th. Pelosi said Thursday that the date is "fraught with meaning for us."

"I think what President Obama needs to do is level with the American people," Van Dyk said. "I don't think the United States can win this war in the short term. It's going to take a long time."
By Brian Montopoli