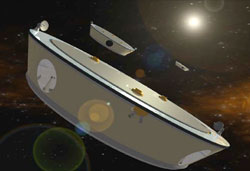 Three spacecraft circling the sun will put the last piece of Albert Einstein's General Theory of Relativity to the test by firing laser beams at each other from distances of millions of miles. The point of the exercise:Test for the presence of gravitational waves.

The scheduled test, to be jointly conducted by NASA and the European Space Agency, is expected to be carried out sometime around the end of this decade. Next year, though, the agencies expect to be able to perform an early test of the technology.

The spacecraft will get launched from a rocket and later get individually propelled into orbit around the sun. Designed as short cylinders, the crafts will be equipped with solar panels. They are expected to remain operational for approximately ten years. In orbit around the sun, the crafts will carry cubes of gold platinum, floating in zero gravity. The test will involve laser beams fired between the spacecraft. Scientists will then measure any changes in the distance between the cubes.

Although researchers so far have been unable to confirm the detection of gravitational waves, they are confident there is ample evidence testifying to their existence. Scientists previously confirmed several of Einstein's predictions with the help of a double pulsar - two stars which orbited each other at speeds of up to 621,000 miles per hour. But gravitational wave experts say that this last piece of Einstein's theory of general relativity regarding gravitational waves had yet to be proved correct.

"They are produced when massive objects like black holes or collapsed stars accelerate through space, perhaps because they being pulled towards another object with greater gravitational pull like a massive black hole," Professor Jim Hough of Glasgow University told The Telegraph. "Unfortunately we haven't been able to detect them yet because they are very weak. However, the new experiments we are working on have great potential to allow detection."