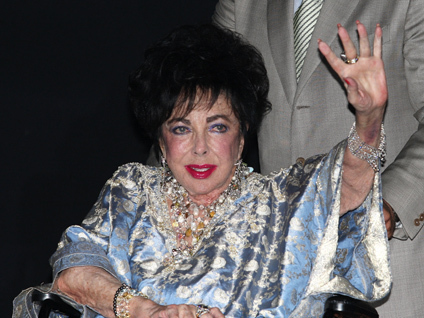 (CBS) - It was a star-studded night in Hollywood, but one of film's biggest stars was missing. Elizabeth Taylor turned 79 on Sunday, and she spent her birthday watching the Oscars from a hospital bed.

The two-time Academy Award winner "will spend a quiet birthday this year as she continues to rest and recover," Taylor's spokeswoman told Reuters yesterday.

The Hollywood legend has been in Cedars-Sinai Medical Center in Los Angles for the past two weeks, according to the news service. Since 2004, Taylor has suffered from congestive heart failure, the condition which forced her current hospital stay.

The actress reportedly was rooting for "The King's Speech" to win the Oscar, a birthday wish that came true last night.

Taylor was a two-time best actress winner - in "Butterfield 8" in 1960 and "Who's Afraid of Virginia Woolf?" in 1966. She appeared in her first film at the age of nine.

For the past five years, Taylor has been using a wheelchair due to chronic pain after breaking her back four times. In addition to congestive heart failure, she has also had to deal with three hip-replacement operations, a benign brain tumor, skin cancer and pneumonia, according to Reuters.