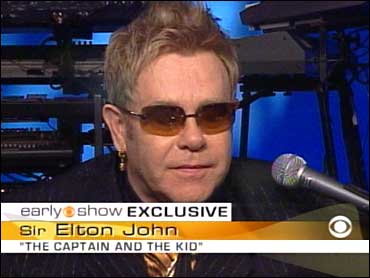 Although Elton John is nearing 60, he said he feels like he is in the prime of his career.

Armed with the benefit of age and perspective, John is at a comfortable place in his career where he really has nothing left to prove and can pursue the things he wants to.

John is performing at the star studded Fashion Rocks concert, which will kick of New York City's fashion week. It will air Friday night on CBS. The money raised from the concert goes toward the Elton John AIDS foundation, which has raised over $100 million for AIDS programs around the world. Tuesday night, he performed in the AIDS foundation benefit concert.

He sat down with The Early Show's Hannah Storm for an exclusive interview. He said he feels more satisfied than ever with his life and career.

"I'm in a free place," he said. "I haven't got any pressure to make hit records. I've got plans to do another album, which would be completely different. I want to do a hip-hop album with some people."

John said one of the executives at his record company, Rocket Records, approached him with the idea of collaborating with Dr. Dre, Eminem, Pharrell and Timberland.

One thing that John will not be changing is his penchant for auctioning off his famously colorful outfits. Over the years, he has auctioned off 10,000 pieces.

"We did that," he said. "We have a sale every two or three years. David, my partner, and myself get rid of all our street clothes we don't use anymore, and is we sell them for the AIDS foundation."

John said it's easy for him to part with his outfits, many of which he will not wear again. He did, however hang on to his statue of liberty costume.

"I'm very fond of the Donald Duck one because it just made me laugh," John said. "I didn't have a rehearsal in how to get into it. I was backstage at Central Park trying to get into it, and I had my leg through the arm hole, and I couldn't get into it for laughing."

John said his need to dress up for his audience is a "British thing." He said the British grow up immersed in the theater and surrounded by pantomime. But looking back on some old outfits, he said a few were "horrendous."

"Well, the '80s, that was the fashion then," he said. "I used to wear eight-inch high heeled shoes, and it made me 6-foot-4 inches, and I came down to 5-8. I took it way too far for too long, and I would say that. I think most people would agree with that."

Music and fashion are two of John's passion, but so is working for charity. He said that he thinks the AIDS foundation concert will raise nearly $2 million.

"Which is, for me, a huge payday for us," he said. "I thought in the '80s I didn't really do much for AIDS. I was too unreliable at that time in my life to, you know, with drugs and drink involved, to actually come to the fore and be accountable."

John said that after he became sober in 1990, he realized he had been living a self-obsessed and self-absorbed life.

"I thought, 'Right, I'm going to do something now,' " he said. "But it's really, really satisfying, and when you go and visit the projects that you funded and you get the immediate reaction from people when you see them and you realize how much you changed their lives, you realize, gosh, I am doing something decent with my life. I'm not wasting it. I'm not putting it up my nose, I'm not drinking and putting it down my throat. I'm actually doing something worthwhile. I wish I would have come to my senses earlier and done something early on ... than wait until I'm 43."

Today, John said he couldn't be happier. He feels blessed for his friends, life partner and successful career.

"Life is good. There's lots of things that I have to do professionally and fill philanthropically, but I've got the energy and the help to do it," he said. "Thank God I have."

To see the entire Elton John AIDS foundation benefit, including the songs from his new album "The Captain and the Kid" visit blueroom.att.com.