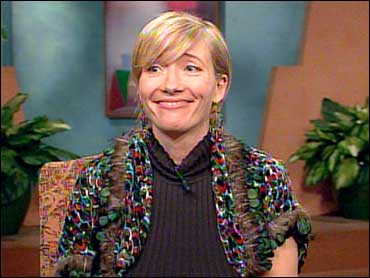 Emma Thompson has charmed Hollywood before, but this time she's a double threat with "Nanny McPhee."

Thompson stars in this new family comedy and also wrote the screenplay.

An adaptation of the "Nurse Matilda" book series from the 1960s, "Nanny McPhee" is about a nanny with magical powers, who charms a brood of seven unruly children.

Thompson dropped by The Early Show to

chat with
co-anchor Julie Chen about the film, which required a radical transformation in the makeup trailer.

The "Nanny" look included giant warts, a bulbous nose, a protruding tooth and what Thompson calls a "Neanderthal" wig. The transformation was so complete, Thompson's young co-stars were decidedly nervous when they first caught a glimpse.

"They were not scared but they were, if you know what I mean, very proper and shaking hands and everything," Thompson told Chen.

Thompson said she began working on the screenplay 10 years ago.

"I took out the book, I saw the picture and I thought, 'This is such an interesting story,' " she told Chen. "Someone that changes as people's behavior changes."

The whole concept rang true to her.

"I think our hearts are very chemical and we change the way we see people according to how we feel about them," Thompson said. "That's what love is, in a way."

In the movie, the children, who have driven away 17 previous nannies, begin to submit to Nanny McPhee's charms. As their behavior improves and they begin to love Nanny, her frightening appearance starts to mysteriously transform.

Thompson says the story has more than one moral and taught her something about being a mother to her 6-year-old daughter.

"There are quite a lot of strange underneath and over-the-top lessons," she said. "The thing I learned the most is about giving your children space — the most difficult thing to do."