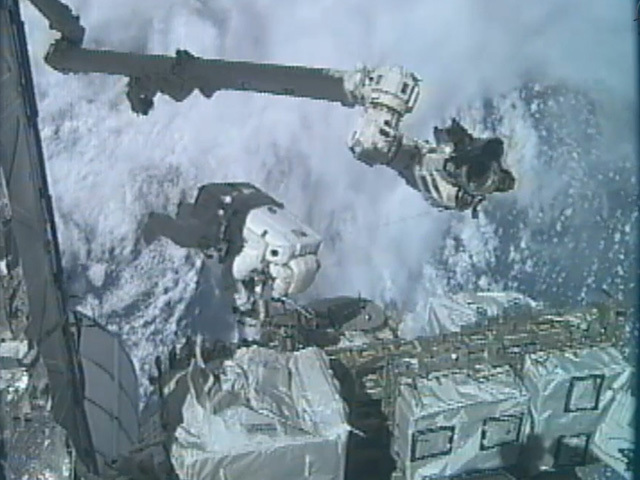 CAPE CANAVERAL, Florida - Astronauts making the last spacewalk of NASA's space shuttle era on Tuesday retrieved a broken pump from the International Space Station and installed a fill-er-up experiment for a robot.

The space station's two-armed robot Dextre won't tackle the $22.6 million playset - a fancy Fisher-Price toy as one astronaut describes it - until long after Atlantis departs and the shuttle program ends.

But perhaps more than anything else on this final journey by a shuttle, the robotic demo illustrates the possibilities ahead for NASA: satellite-refueling stations in space run by robots.

In a departure from previous shuttle visits, the spacewalking job fell to space station astronauts, Michael Fossum and Ronald Garan Jr., who teamed up for three spacewalks in 2008. The four-person Atlantis crew is the smallest in decades, and so the lone spacewalk of the mission was handed over to the full-time station residents.

It was the 160th spacewalk in the 12Â½-year life of the orbiting outpost, and the last one planned for Americans for more than a year.

"To see that we've really done it, it's just awe-inspiring," Fossum said of the completed space station and all the spacewalks that went into it. "Ron and I are honored to be a part of it, to help close out one of the final chapters."

Fossum and Garan completed the two major chores - the pump removal and robotic test hookup - inside of 3Â½ hours. They spent the rest of the 6Â½-hour spacewalk on a variety of small tasks.

The two paused during their spacewalk to admire the view 245 miles (395 kilometers) below - Kennedy Space Center - and on the next swing around the world, Houston, home to Mission Control.

The ammonia coolant pump stopped working last July and, for more than two weeks, left the space station with only half its cooling capability. Space station residents had to perform three emergency spacewalks last summer to replace the pump and restore full cooling to all the on-board equipment.

NASA wants the pump brought back to Earth so engineers can figure out why it failed to help them keep the on-board station pumps running. The space station is intended to operate until at least 2020.

Garan gripped the pump as the space station's robot arm maneuvered him over to Atlantis. The pump was anchored in the shuttle's payload bay, ready for next week's ride home. A small object ended up floating away, possibly a fabric strap from some insulation.

As they turned their attention to the robotic experiment, the spacewalkers thanked all the thousands of people who worked on the shuttle. "It is really beautiful," Garan said.

Flight controllers choked up as Garan wrapped up work in the shuttle payload bay and noted that he was leaving it for the last time - the last time by anyone.

"We're technical people and we keep our heads in the game in real time," said Mission Control's Glenda Brown, the lead spacewalk officer, "but there wasn't any one of us who didn't have a little bit of a catch in our throat."

The robotic workbench - which the astronauts attached to a shelf on Dextre's base - consists of a 3Â½-foot box holding four customized tools, including a wire cutter and a safety cap removal device, as well as an assortment of knobs, caps, valves and a half gallon of ethanol.

Dextre - a hulking metal robot with 11-foot arms - will release locks on the tools in August but won't try out the workbench until January.

The designers of the experiment - based at Goddard Space Flight Center in Greenbelt, Maryland - envision robots one day using these methods to fill the fuel tanks of satellites orbiting as high as 22,300 miles (35,886.71 kilometers). That would keep the spacecraft operating longer, instead of becoming expensive pieces of space junk. What's more, spacecraft bound for distant worlds could fill up after launch, thereby flying more payloads because of the savings in fuel weight.

While the spacewalk unfolded, some of the eight astronauts inside worked to unload the nearly 5 tons of supplies that were delivered in a giant cargo carrier by Atlantis. It represents a year's worth of food, clothes and other housekeeping items, to tide the crew over in case commercial rocket makers fall behind in their own cargo runs. The first such haul is supposed to take place by year's end.

Until now, the shuttle has hoisted the bulk of supplies to the space station. Cargo runs by Russia, Japan and Europe will continue.

NASA is turning to private enterprise in the post-shuttle period, so it can meet the White House goal of sending astronauts to an asteroid by 2025 and Mars the decade after that.

The 13-day flight by Atlantis is the last for the 30-year shuttle program. Atlantis is due to return July 21 to Kennedy, where it will go on display at a tourist center.