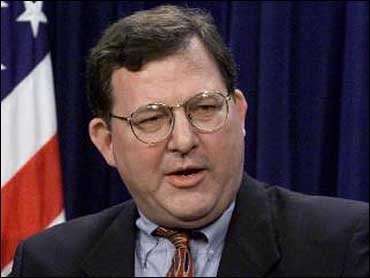 A provision in a House-passed energy bill would require federal compensation to private companies for costs associated with oil and gas leases that can't be developed.

Democrats and environmentalists complain that could force taxpayers to pick up a billion-dollar-plus tab for undeveloped leases off the shores of California and elsewhere.

"Many, if not most, of these leases are probably ineligible for development and therefore are worthless," Rep. Lois Capps, D-Calif., said of the 36 undeveloped leases off her state's coast. "But under the energy bill, the taxpayer will be forced to fork over billions of dollars to the oil companies that don't want to develop the leases anyway."

Rep. Chris Cannon, R-Utah, had the provision inserted into the energy bill, according to his spokesman, Charles Isom.

Brian Kennedy, spokesman for the House Resources Committee, described it as a "good government" measure that would provide reasonable compensation to companies that acquired federal leases only to see their energy development plans blocked by changes in state or federal government policy.

"If the federal government turns a lease into a lemon, in essence, producers are entitled to get their money back for the lemon they paid for," Kennedy said Friday.

Cannon was traveling and unavailable for comment on the provision, one of more than 2,500 individual sections in the wide-reaching energy bill that was approved by the House on April 21.

Of the country's more than 30,000 onshore leases and about 8,000 offshore ones, the measure would likely affect just a relative handful of undeveloped leases that have become locally contentious. Among these are the 36 off Santa Barbara and Ventura counties in California, 99 in the Gulf Coast off Florida and about 80 on the Rocky Mountain Front in Montana.

The provision in the energy bill stipulates that if a permit denial or some other government action prevents a lease from being explored or developed, the leasing company can request the Interior secretary to authorize the lease for repurchase.

Then, the federal government must pay to the leasing company the original cost of the lease, along with other expenses including environmental and seismic studies and drilling costs.

Peter Douglas, executive director of the California Coastal Commission, called the payback "a rip-off of the public treasury."

The state commission soon is expected to rule on whether the leases off California's shore can be extended.

Calls to officials with three of the companies that operate some of the leases off California were not returned Friday.

The Senate has not yet passed the energy bill but is expected to start work on its version in coming weeks.