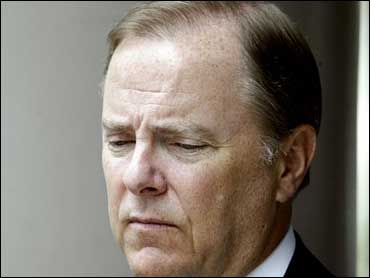 Former Enron CEO Jeffrey Skilling reported to federal prison on Wednesday to begin serving his 24-year sentence for fraud and other crimes in the collapse of the former energy giant.

Skilling arrived at the low-security prison a little after noon Central time in a small silver SUV. The vehicle pulled up to the front gate, and at least four people got out. Skilling hugged a woman who arrived with him, and the mini-entourage walked into the prison. A few minutes later, everyone except Skilling emerged and the SUV drove away.

Even if he earns a few years off for good behavior and for participation in an alcohol treatment program at the Federal Correctional Institution in Waseca, Skilling, 53, will be an old man at the end of his 24-year, four-month prison term. That's more than twice as long as the sentence of any other Enron executive.

Skilling and Enron founder Ken Lay were convicted last May on numerous counts of fraud, conspiracy, insider trading and other charges in the collapse of the Houston-based company, which led to the loss of thousands of jobs, more than $60 billion in company stock and more than $2 billion in employee pension plans.

A federal judge on Tuesday denied Skilling's request to remain free on bond pending his appeal.

Judge Patrick Higginbotham of the 5th U.S. Circuit Court of Appeals wrote in his two-page order Tuesday that "Skilling raises no substantial question that is likely to result in the reversal of his convictions on all of the charged counts."

As a result, Higginbotham denied Skilling's request for bail pending his appeal and vacated an earlier order staying his prison report date.

Lay died in July of a heart attack before he could be sentenced, prompting a judge to vacate his conviction.

Lay "probably would have faced a similar fate if he'd been able to stand up for sentencing on the same day as Skilling," said Leslie Caldwell, a former federal prosecutor and one-time chief of the Justice Department's Enron Task Force.

Andrew Fastow, the former chief financial officer pegged as the mastermind behind the complicated financial schemes that ultimately doomed Enron, got six years in prison after pleading guilty. Several other executives are serving prison terms of between 18 months and five years.

An important distinction, said former Task Force attorney Sam Buell, is that those below Skilling all pleaded guilty to some offenses, expressed remorse, and, in some cases, went on to cooperate with the prosecution. In several instances, prosecutors recommended leniency in those sentences.

"It's harder for a judge to do that, to exercise that leniency, when the judge is dealing with the person at the top who didn't reach any kind of agreement in the case," Buell said.

A better comparison for Skilling's sentence, Caldwell said, are those received by other disgraced CEOs like Bernard Ebbers of WorldCom, serving a 25-year sentence; and Dennis Kozlowski of Tyco International Ltd., who's serving 8 1/3 to 25 years in prison in another fraud case.

"I've always thought since the beginning of the Enron case that none of this ever would have happened without Jeff Skilling," Caldwell said. "I don't think it's inappropriate that he is getting the harshest sentence of anyone."