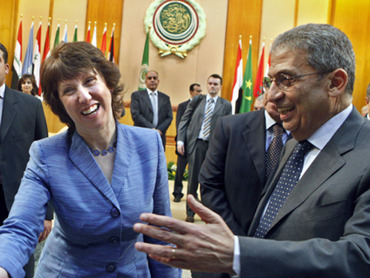 The European Union's top diplomat arrived in Damascus late Monday for talks with Syrian President Bashar Al-Assad, as part of a regional tour to try to give the EU more clout on the world's diplomatic stage.

Catherine Ashton, who has faced criticism in Europe for not being visible enough since she was appointed the EU's foreign and security affairs chief last November, flew from Cairo, where she kicked off her first Middle East tour since assuming her post, reports CBS News' George Baghdadi from Damascus.

The top diplomat, who is also vice president of the European Commission, arrives in the region at a time when international efforts to restart even indirect talks between Israelis and its Arab neighbors are in peril.

"This region does not need more conflict. It needs peace. Peace based on international law. Peace now because any delay will only make it harder to achieve," Ashton said in her speech to the League of Arab States today.

"We know that peace is about more than signing agreements on borders and security arrangements. It is about compromise and reconciliation; about co-operation across borders and shared security. We must aim for a comprehensive peace in which all people in the region can share. Everyone has to make their contribution and take their responsibility. As the European Union we have a firm commitment to the security of Israel; and we stand up for a deal that delivers justice, freedom and dignity to the Palestinians."

Baroness Ashton's ambitious visit — her first big international test of the "quiet diplomacy" that she promised would deliver results for Europe — will also take her over the course of the week to Lebanon, Jordan, Israel and the Palestinian Territories to meet with political leaders and civil society representatives, before heading to Moscow on Friday for a meeting of the international quartet on the Middle East.

The Middle East Quartet comprises Russia, the United Nations, the United States and the EU.

Ashton was scheduled to meet with Assad and foreign minister Walid Mouallem Tuesday morning before holding a press conference.

A major economic deal between Syria and the EU (known as the Euro-Mediterranean Association Agreement) has been on hold for the last six years, and is on top of the agenda. The two sides came close in October to sealing the pact, which centers on economic and legal reforms as well as respect for human rights and democratic values.

The agreement would qualify Syria for more aid from the European Union, beyond the €500 million ($748.6 million) it has received since 1979.

But Syria backed out and refused to attend the signing ceremony in Brussels, saying the draft needed more study.

Syria is already facing a very tough environment for its industry with liberalization and free trade agreements with the Gulf and Turkey. All other countries along the southern and eastern shores of the Mediterranean have signed similar agreements with the European Union.

Ashton, 53, was the EU leaders' surprise choice to be their high representative for foreign affairs and security policy at a summit last November, succeeding Spain's Javier Solana in the high-profile post, despite having no diplomatic experience.

Syria has been accusing Israel of being an "untrue partner" in peacemaking. Syria's foreign minister publicly blamed Israel last month for "spreading an atmosphere of war," and warned that Damascus would not hesitate to strike deep into Israeli territory if provoked. He said plainly that a conflict would be "all-out," regardless of whether "it hits southern Lebanon or Syria."

Syria argues that Europe, and Washington in particular, should make every effort to force Israel to accept the Arab peace initiative. Damascus wants to regain the strategic Golan Heights, an enclave Israel captured during the 1967 Mideast War. It has offered peace in exchange.

Frederic Hof, an assistant to George Mitchell (the former Senate Democratic leader who is the spearheading U.S. peacemaking efforts in the Mideast), was expected in Damascus on Thursday, according to Syrian sources to CBS News. Acting Assistant Secretary of State for Near East Affairs Jeffrey Feltman and Daniel Shapiro, a senior staffer on the National Security Council, were also believed to fly in the Syrian capital before the end of this month.

Ashton would also see a gloomy picture when she arrives in Israel. Top U.S. and Palestinian officials last week reacted angrily to Israel's announcement that it would approve the construction of 1,600 new homes in West Bank settlements. The announcement was made as U.S. Vice President Joe Biden arrived in Israel, and just after Palestinian President Mahmoud Abbas agreed to begin indirect peace talks.

Speech by Catherine Ashton at the League of Arab States, Cairo (3.15.10)