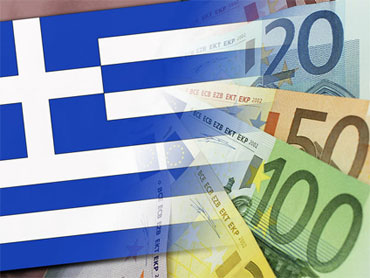 Countries that use the euro said Thursday they have agreed on a financial backstop for Greece that would combine loans from other eurozone governments and the International Monetary Fund, a move aimed at stopping the government debt crisis that has undermined the shared currency.

The bailout program could be used only if Greece winds up shut out of normal market financing such as selling government bonds, and would require all 16 countries to agree on releasing the loan funds.

It also calls for tougher rules to keep government finances from getting out of control and causing another crisis - one key weakness in the euro that has been exposed by the current troubles.

The plan, pushed by Germany and France, was an attempt to stem a government debt crisis that has raised concerns that Greece's woes might spread to other euro governments with shaky finances, such as Portugal and Spain, raising borrowing costs and worsening the large debt loads governments have taken on as a result of three years of global economic turmoil.

A Greek default would be a serious blow to the euro - so serious that most economists and market analysts think Europeran governments would step in and stop it somehow, but promises of help had been vague until now.

German, Portuguese, Spanish and Greek officials confirmed a deal at a Thursday summit of European Union leaders. They gave few details ahead of formal announcement of the deal. It was unclear whether the formal announcement would come later Thursday.

Portugal's prime minister Jose Socrates told reporters all the 16 countries using the euro would contribute - including his indebted nation. "The interest rates will be reasonable and not speculative," he said.

Germany and France earlier urged adoption of a loan package for Greece or other financially troubled nations using the euro would only come as a last resort when the country cannot borrow enough from financial markets, according to a draft text seen by the Associated Press.

The text does not promise cheap loans to Greece - which wants to borrow at rates lower than those demanded by bond investors wary of the country's shaky finances.

The aim would not be to provide credit at average euro area interest rates, but to set rates that reflect a borrowers creditworthiness to give them a reason to return quickly to normal market funding sources.

It does not mention a figure for a potential bailout. Two diplomats speaking on condition of anonymity say the total rescue plan for Greece could total some euro22 billion with the majority coming from European nations and the rest from the IMF.

European and U.S. stock markets spiked higher Thursday on news that a financial rescue package for Greece was taking shape. Market worries over Europe's slow moves to set up a safety net for eurozone members who can't pay their bills has sent the euro sliding to a 10-month low.