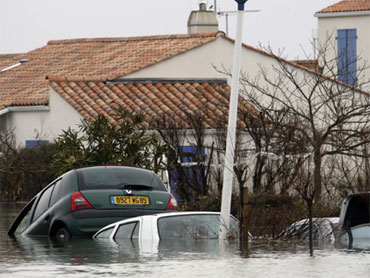 Thousands of firefighters and other rescue workers searched house by house Monday along France's devastated Atlantic coast, trying to help those still stranded by a storm that smashed sea walls and killed at least 62 people across western Europe.

It also battered Belgium, Portugal, Spain and parts of Germany, and has snarled train and air travel throughout the continent.

Regional officials clamoured for France to quickly reinforce its aging sea walls. About half the French death toll of 51 was attributed to the breach of the sea wall off the coastal town of L'Aiguillon-sur-Mer, where ocean waters surged up to the roofs of some homes.

The storm also caused six deaths in Germany - including a 2-year-old boy who drowned after he was blown into a river. Three people were dead in Spain, and Belgium and Portugal had one fatality each.

France's railways had major delays, and cancellations continued Monday at Frankfurt airport - one of Europe's most important hubs.

Sarkozy flew over the worst-flooded areas and met with locals in L'Aiguillon-sur-Mer, promising to quickly channel recovery funds.

"It is a national disaster, a human drama with a terrible death toll," Sarkozy said. "The urgent thing is to support the families who have members missing or dead."

The French leader also tried to staunch a storm of criticism over the state of the country's sea walls, saying "this is not the time."

One official noted just how old some sea walls were.

"The sea wall that broke dated from (the era) of Napoleon," Philippe de Villiers, a far-right politician who heads the regional government in Vendee, told France-Info. "Either we build (new) sea walls, in which case they need to be taller and taller ... or we have to build further" inland.

In Portugal's Azores islands, reports say a flash flood swept a school bus off a road and into a ravine in a rural part of Sao Miguel, one of the Azores archipelago's nine islands. The driver and one child are missing.

Two children were admitted to a hospital after the accident early Monday, one with hypothermia and the other with a broken leg.

The Azores islands lie 900 miles west of mainland Portugal in the Atlantic Ocean.

In Germany Xynthia caused serious problems to railway transport, from North Rhine-Westphalia to Baden-Wurttemberg. Frankfurt Airport was closed and 150 flights were cancelled.

Wind reaches speed of more than 100 m.p.h. Several were killed by falling trees, including a 74-year-old man who car was struck by a fallen tree. His wife survived.