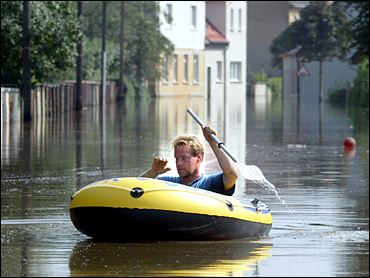 Flooding spread through eastern Germany on Monday, threatening to add to the misery of tens of thousands forced from their homes as the country faced its biggest relief effort since World War II.

In Hungary, the Danube River peaked at a historic high in Budapest without causing major flooding after relief workers spent a frantic night bolstering dikes. The capital's high flood walls, built at the turn of the last century, held off the floodwater in the city center, though one barrier gave way in a northern suburb.

Europe is wrestling with the aftermath of violent storms that swept the continent two weeks ago. German authorities reported three more deaths Monday, bringing the Europewide toll to at least 109.

Forecasters predicted generally dry weather for Austria and Germany over the next few days, with scattered showers over western Hungary. No abundant rainfall was expected.

The floodwater has ebbed in Austria and the Czech Republic and begun to fall in Dresden, the biggest German city hit so far, allowing the start of a massive cleanup and rebuilding operation expected to cost some $20 billion Europe-wide.

Under sunny summer skies Monday, thousands of emergency workers, soldiers and volunteers were working round the clock to pile tons of sandbags onto sodden dikes along Germany's Elbe and Mulde rivers to protect smaller towns.

Sweeping toward the North Sea from the hills on the Czech border after record rainfall, the Elbe forced workers to retreat after bursting its banks in seven places Sunday near Wittenberg, the town where Martin Luther launched the Reformation in 1517. But officials said the old town was not under immediate threat.

Rescuers used boats and ropes to bring several people trapped in their homes to safety and were scouring nearby villages in the darkness to ensure everyone had been evacuated.

High water also threatened the city of Dessau, best known for its Bauhaus architecture school. Helicopters dumped sand on the dikes to strengthen them.

More than 80,000 people have been evacuated across the region. A government relief agency, the Technical Aid Service, said Monday that sand bags were running short. Denmark shipped 650,000 sandbags to Germany to help, and Italy, France, the Netherlands and other countries have also offered to help, the agency said.

In Bitterfeld, workers shored up dikes on the Mulde about a mile from one Europe's largest chemical industry complexes, grouping 350 companies.

Authorities played down concern that the chemical plants could be overwhelmed and release toxins into the water that has covered part of the town since Saturday.

In Dresden, where expensively restored monuments such as the Semper Opera and Zwinger Palace museum were partly flooded, officials said some residents may be allowed to return home on Sunday.

Further north, the city of Magdeburg began to move people out as the Elbe's crest surged toward the North Sea. The river is expected to threaten there in the next few days.

As the Danube River surged to a historic high around Budapest, authorities evacuated about 2,000 people in the area on Sunday. But they said the city would not see the devastation that befell other countries because of 33-foot-high walls running along the river banks throughout much of the city.

The river peaked at a height of 28.3 feet in Budapest early Monday, a touch over the previous record set in 1965, then began falling, said Tibor Dobson, a spokesman for Hungary's national disaster relief office.

"Our main concern now is to ensure that waste from the city's sewers does not cause any problems or enter the water supply," Dobson said.

Most evacuated towns lie north of Budapest. A few areas in the southern part of the capital also were evacuated — areas where the flood walls don't rise as high as in the city center.

The government postponed an annual fireworks ceremony scheduled for Aug. 20, or St. Stephen's Day, which commemorates the king who founded Hungary 1,000 years ago.

"It would be unbecoming to celebrate with fireworks in a situation where tens of thousands are working on the dams," Prime Minister Peter Medgyessy said after the meeting.