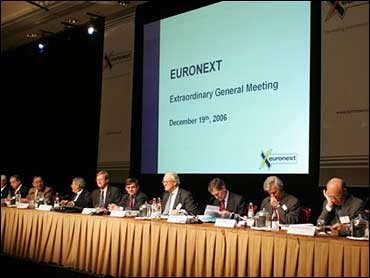 The combination was backed by more than 97 percent of votes cast at the meeting in Amsterdam. Fewer than 2 percent opposed the deal and about 1 percent abstained. The tie-up is subject to regulatory approval and a vote by the NYSE's shareholders on Wednesday.

In recent days, NYSE and Euronext had won support from former critics of the deal including the Dutch government and Paris Europlace, an influential French business group.

The Dutch government, which holds a veto over the combination and had threatened to use it unless its concerns were addressed, said it planned to approve the tie-up but would seek further guarantees that there will be no "spillover of U.S. laws, legislation and regulations" onto European markets.

The NYSE's cash-and-stock acquisition of Euronext — which runs the Paris, Amsterdam, Brussels and Lisbon stock exchanges — comes amid a rush for consolidation among global exchange operators. The Nasdaq Stock Market Inc. has amassed a 29 percent stake in the London Stock Exchange Group PLC and launched a hostile bid for the rest earlier this month.

The head of Paris Europlace, which initially opposed both the NYSE offer for Dutch-registered Euronext and a competing bid from Deutsche Boerse — since withdrawn — also said on the eve of the vote that he was "satisfied" with concessions offered by the U.S. stock exchange operator.

These include equal representation for Europeans and U.S. directors on the 22-member board, announced last month. Under the original proposal, the Europeans would have been outnumbered by 12 to 10.

Euronext broke off talks with Deutsche Boerse earlier this year, blaming the Frankfurt exchange operator's refusal to spin off its clearing and settlement units or accommodate Euronext's "federal" model — under which the rules of each market are governed by its local regulator. Deutsche Boerse also rejected a proposal by Paris Europlace that it merge its cash equities arm with Euronext prior to any trans-Atlantic deal.

Atticus Capital, Euronext's largest shareholder, had previously pressed for a Deutsche Boerse tie-up but lifted its opposition to the trans-Atlantic deal earlier this year, also raising its stake in NYSE.