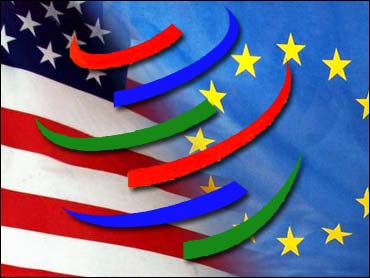 The World Trade Organization on Friday ruled that the European Union can impose trade sanctions of up to $4 billion against the United States in a tax dispute, the biggest penalty it has ever allowed.

The sanctions are 20 times the amount levied in any previous WTO dispute. Experts say their potential effect on EU-U.S. trade would be so serious that the ruling will likely prompt a new compromise between the two sides.

The result is a big victory for the EU, which had requested the $4 billion amount. The United States claimed the award should be less than $1 billion.

The United States said it was "disappointed" with the WTO ruling.

But in a prepared statement, U.S. Trade Representative Robert Zoellick said he believed the ruling will "ultimately be rendered moot" by the United States changing its tax laws to comply with international trade rules.

The WTO considered the request from the EU after ruling last year that a system of tax breaks for companies from the United States was an illegal subsidy and violated international trade rules.

The U.S. program, known as "Foreign Sales Corporations," allows U.S. companies with a foreign presence to exempt between 15 percent and 30 percent of their export income from U.S. taxes. Congress passed this system in 2000 to replace an earlier version also ruled an illegal subsidy by the WTO.

The loophole means companies pay less tax, making their products cheaper and giving them an advantage over foreign competitors.

The tax break, coupled with a second benefit not challenged by the EU, is expected to save U.S. companies an estimated $4.8 billion this year.

The United States accepted that it was violating WTO rules but said the penalty should be below $1 billion.

"I'm disappointed the (WTO) arbitrator did not accept the lower figure put forward by the United States," Zoellick said in a statement. "We believe that $1 billion is much more accurate."

"Nevertheless, the key point, as the President has said, is that the executive branch will work with Congress to fully comply with our WTO obligations.

"I believe that today's findings will ultimately be rendered moot by U.S. compliance with the WTO's recommendations and rulings in this dispute," Zoellick said.

The WTO decision had been postponed several times since April, officially because of problems with translating documents and the complexity of determining an exact figure for fines. But both sides have been happy with the delays, not wanting to inflame trans-Atlantic trade tensions at a sensitive time.

The United States and EU also have been trying to defuse a battle over steel tariffs.

The decision does not require the retaliatory tariffs but gives the Europeans the option to impose them.

It is not clear whether the European Union will immediately take action. Many observers believe the damage that sanctions would cause to both sides will persuade them to reach a compromise.

Both sides are searching for a way out of the impasse. European Trade Commissioner Pascal Lamy has said he is more interested in U.S. elimination of the tax breaks than in retaliation.

Washington has agreed. On July 11, Ways and Means Committee Chairman Bill Thomas introduced proposed tax legislation designed to settle the dispute. It would repeal the existing program of tax breaks and put in place a new international tax system.

The European Union has yet to say what it thinks of the new legislation, but Peter Carl, director-general for trade at the EU Commission, told reporters it "appears to be moving in the right direction."

"I understand that what is being proposed is the outright abolition of the existing legislation, but we want to make sure it isn't creeping into the system through the back door," he said.