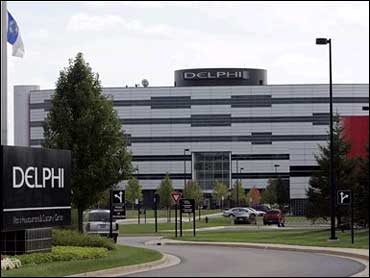 Delphi Corp. workers who accepted buyouts from the nation's largest auto parts supplier have seen taxes eat away at their compensation packages as they struggle to build new careers.

Delphi filed for bankruptcy protection in October 2005 and later reached an agreement on buyout and early retirement programs with its two largest unions, the United Auto Workers and International Union of Electronic Workers-Communications Workers of America.

Employees received buyouts or early retirement incentives of $35,000 to $140,000 or more, depending on years of service and whether they were eligible to retain benefits after leaving Delphi.

Still, she counts her blessings. Delphi's mounting problems prompted her to prepare as best she could financially. She plans to sell her Moraine home, buy a 4-acre farm and pursue a job at the Behr Dayton Thermal Products manufacturing plant in Dayton.

"I'm luckier than most," Sanders said. "I saw this coming a long time ago."

For the departing workers, it is an exercise in retooling their lives at middle age.

Angela Guy, 38, of Dayton, left her job in November at Delphi's Dayton brake plant. She's preparing to start school next spring to pursue a new career in nursing. A single parent, Guy is counting on her family to help with her three children.

She is eager and nervous about her pending career change, but knows she must succeed for the sake of her children.

Delphi says reducing its hourly labor costs is essential if the company is to emerge from court-supervised reorganization in 2007.

Meanwhile, Delphi said Monday it has accepted a $3.4 billion investment from a group of private equity companies to support its emergence from bankruptcy protection.

Under the deal, affiliates of Appaloosa Management LP, Cerberus Capital Management LP and Harbinger Capital Partners Master Fund I, as well as Merrill Lynch & Co. and UBS Securities LLC, would invest the company.

Separately, Delphi accepted a proposal from JPMorgan Chase Bank and a group of lenders to refinance the company's existing $2 billion debtor in possession credit line and about $2.5 billion in loans.