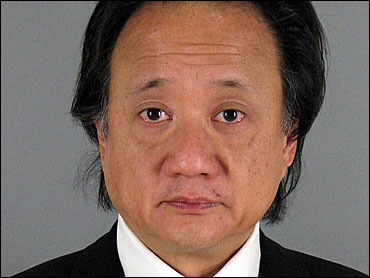 Former Democratic fundraiser Norman Hsu was sentenced to more than 24 years in prison Tuesday by a judge who accused him of funding his fraud by manipulating the political process in a way that "strikes at the very core of our democracy."

U.S. District Judge Victor Marrero sentenced the 58-year-old Hsu to 20 years in prison for his guilty plea to fraud charges and another four years and four months in prison for his conviction at trial for breaking campaign finance laws.

The Taiwan native's donations became an embarrassment for Hillary Rodham Clinton's presidential campaign. His arrest led Clinton to return more than $800,000 to donors linked to Hsu.

In a lengthy criticism of Hsu's fraud, the judge said the former fundraiser used political contributions to win respect and impress investors as he committed a campaign finance fraud that "strikes at the very core of our democracy."

The judge said Hsu stole more than $50 million from hundreds of investors in a 10-year Ponzi scheme by winning their confidence with his pristine reputation and friendly nature, a two-faced quality the judge noted was common among certain white collar criminals.

He called Hsu a "wolf in sheep's clothing."

He said his "conniving use of the political process to fund his fraud" made his crimes "much more sinister and reprehensible."

Before he was sentenced, Hsu apologized to "your honor and everybody else."

Prosecutors say Hsu obtained millions of dollars from investors by claiming clothing or high-technology ventures would pay returns of 14 and 20 percent. Instead, he spent the money on himself or made charitable contributions to enhance his image, they said.

Hsu's decade-long Ponzi scheme collapsed in September 2007. In addition to the 24 year and four month sentence he received Tuesday, Hsu must separately serve three years in prison for a conviction in California.

Outside court, Hsu lawyer Bernard Seidler said his client told him goodbye before returning to prison, where he has been for the last two years. The lawyer said Hsu reacted calmly to the sentence, which was less than the 30-years-to-life term prosecutors had sought.

"I think he was expecting it. I really do," Seidler said.

Seidler has said Hsu donated about $850,000 of his own money to political candidates and helped raise $1 million for Democratic candidates through about 75 people he knew who also made contributions. He said Hsu gave $3.5 million to charitable causes.

Prior to sentencing, Seidler told the judge that his client had helped educate fellow inmates over the last two years. Some of the inmates even wrote letters to the judge on his behalf. The judge cited letters he received from victims as well.

The judge, though, said benevolence was a common characteristic of a subset of white-collar criminals who live a double life as they carry out irrational, greedy acts "totally out of character with their otherwise law abiding life."

He accused Hsu of using a "stunningly elaborate system of fraud and deceit" to steal from clients who believed they were among his closest friends.

Marrero said he could not be lenient with someone who had performed "dozens, if not hundreds, of acts of dishonesty and fraud."

When he spoke, Hsu asked the judge to appoint a trustee that he could work with to help recover money for victims. Assistant U.S. Attorney Rua M. Kelly said Hsu's offer should be ignored because he had not helped victims earlier. "Frankly, it's ludicrous," she said.

Assistant U.S. Attorney Alexander J. Willscher portrayed the Democratic candidates Hsu had helped as innocent victims of his devious ways, saying Hsu "lied to some of the pre-eminent politicians in the country."

The government said at trial that Hsu used clients of his fraudulent investment business, including actors and other political novices, as straw donors to make thousands of dollars in campaign donations. The scheme bypassed rules limiting what any individual or group can donate.

During the May trial, prosecutors played a voicemail recording of Clinton, then a senator, effusively praising Hsu for his support.

"I've never seen anybody who has been more loyal and more effective and really just having greater success supporting someone than you," she told him. "Everywhere I go, you're there. If you're not, you're sending people to be part of my events. You know, we're going to win this campaign, Norman, because you single-handedly are going to make that happen."