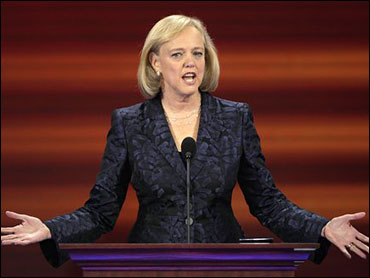 In a speech delivered in Fullerton, Calif., Whitman said she would cut taxes, cut state spending and reform education. She also said she would put a moratorium on the law Gov. Arnold Schwarzenegger signed in 2006 to reduce statewide greenhouse gas emissions.

"People desperately want California to be great again," Whitman said in her prepared remarks. "Most of all, they want to live in a place of opportunity and optimism, not a place of small dreams and scaled-down ambitions."

California currently faces an unemployment rate of 12.2 percent and has grappled with a huge budget crisis over the past year.

"I came to understand (at eBay) that job creation is dependent on a fragile mix of circumstances – circumstances all too often disrupted by the intrusive hand of government," she said.

Whitman said the state needs to balance its environmental concerns with economic concerns. As an example of how she would do that, she said she would put a moratorium on the 2006 state law that restricts greenhouse gas emissions "until we fully understand the law's impact on our economy."

"Liberal environmentalists may not like jobs or people, but California needs both," she said.

The 53-year-old businesswoman has no experience as an elected politician and switched her voter registration from "decline-to-state" to Republican in 2007. She helped run Republican Mitt Romney's primary bid in the 2008 presidential election, and she later joined Sen. John McCain's presidential campaign.

The California primary will take place in June 2010, and Whitman is expected to go up against California's Insurance Commissioner Steve Poizner and former Rep. Tom Campbell. San Francisco Mayor Gavin Newsom is running for the Democratic nomination and will likely face competition from Attorney General Jerry Brown, who was governor from 1975 to 1983.

Whitman has so far committed to personally financing her campaign with $19 million, Politico reports, and raised an additional $6.8 million through July.