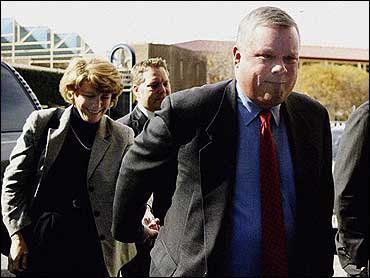 Enron's former chief accounting officer is expected to plead guilty this afternoon to one or more of the 34 criminal charges against him.

Less than three weeks before he was to face a jury alongside Enron Corp. founder Kenneth Lay and former CEO Jeffrey Skilling on charges including conspiracy and fraud, the company's former top accountant, Richard Causey, is switching sides.

Causey was set Wednesday afternoon to plead guilty to one or more crimes stemming from the scandal-ridden company's crash more than four years ago and help the government pursue convictions against his former bosses, according to a person familiar with the negotiations who spoke on condition of anonymity because of the private nature of the discussions.

Causey was scheduled to appear before U.S. District Judge Sim Lake on Wednesday afternoon in a change-of-plea hearing.

Causey agreed to testify against his former bosses in exchange for a leaner prison sentence than he would have received if convicted on all counts. The trial is scheduled to begin next month, but Cohen says a delay is likely to give defense attorneys more time to prepare for the new witness.

The last-minute switch leaves Lay and Skilling with another opponent rather than an ally who has been part of their united defense front since the trio was first indicted last year.

"It changes the face of the trial for the prosecutors and the defense," said Jacob Frenkel, a former federal prosecutor, who noted that the Lay and Skilling defense teams knew a Causey plea was a possibility.

"They had to have some contingency plan for trial preparations for a case without Causey. Now they just put that plan in place," Frenkel said.

He said Causey's decision to become the government's 16th cooperating witness in exchange for a guilty plea allows it to streamline what had been expected to be a four- to six-month trial set to begin with jury selection on Jan. 17.

"What it really means is a shorter, more focused trial, which is better for the government. It probably takes out of the equation some of the more complex accounting issues. The defense was likely hoping to make this case seem like a complex civil financial fraud case, and without Causey, that will be more difficult," Frenkel said.

The pair are accused of conspiring with others to fool investors into believing a wobbly Enron was healthy in the years leading to its December 2001 crash.

Some of Causey's charges also overlap with the seven fraud and conspiracy counts pending against Lay, in which the former chairman is accused of perpetuating the ruse after Skilling's abrupt resignation in August 2001.

Causey, 45, could be more damaging to Lay and Skilling than former Enron finance chief Andrew Fastow, who pleaded guilty to two counts of conspiracy in January 2004.

Unlike his former peer, Causey didn't skim millions of dollars for himself from shady deals. Causey was indicted about a week after Fastow cut a deal with prosecutors and agreed to help the government pursue former top Enron executives.

Skilling was added to the indictment in February 2004, followed by Lay in July that year.

Also, Lay has repeatedly pointed to Fastow as the crook who abused his trust, highlighting the former finance chief's admitted skullduggery.

"There is some safety in numbers from the government's perspective. It's not just Andy Fastow now, it's another senior official. That takes some of the pressure and burden off of Fastow," said Kirby Behre, a former federal prosecutor. "They might make an effective one-two punch in terms of government witnesses."