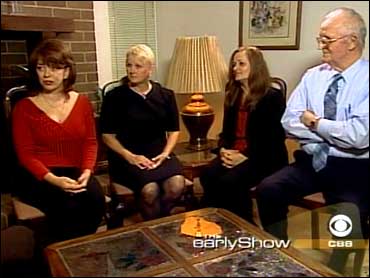 For most of us, the trial of former Enron Chairman Ken Lay and ex-CEO Jeffrey Skilling culminates a story of alleged corporate greed and deception virtually unparalleled in American business history.

But for the more than 4,000 people who worked for the energy giant, and whose lives revolved around it, the proceedings will have an intensely personal hold as they unfold.

spoke with four ex-members of the Enron family
, who recalled the good times, recounted the surreal end, and detailed their travails since.

They also had some choice words as they speculated on what they would feel if Lay and Skilling are convicted — and if they're not — as Syler got their side of the story.

The story of Enron is one of the biggest corporate scandals ever. Thousands of Enron workers lost not only their jobs but their retirement funds.

Before the collapse, though, some employees say working there was a joy.

"It was a wonderful, wonderful sense of pride for us to work there," Diana Peters told Syler.

"They would pass out pompoms and toys," Deborah DefForge remembered, saying Enron was really big on building team spirit.

The former Enron workers once saw theirs as dream jobs.

"We worked and strived all our life to build that corporation to what it was," lamented Charles Prestwood.

"All that you thought you had secure is now gone, just like that!" said Cathy Peterson, snapping her fingers.

But when Enron tuned off the lights, "You had 15 to 20 minutes to get your desks cleaned out and get out of the building," said DefForge.

And, almost overnight, they found their retirement accounts frozen and worthless.

Prestwood says his entire retirement portfolio was in Enron stock — all $1,310,000 of it.

But, says Syler, no on lost more than Peterson.

As the scandal unfolded, her husband, Bill, was diagnosed with melanoma.

"When he was first diagnosed, they said, 'It's a 50-50 chance you can make it, but a positive attitude is key to your recovery.' "

Bill Peterson had cancer surgery the same week Enron imploded. Cathy says the company had promised to keep paying for disability, but the benefits stopped.

"He just had surgery, he had three drainage tubes coming out of his side … and he was on the phone … and he said, 'Uh huh, uh huh, uh huh. I understand.' He gives the thumbs down sign, and my whole world went into a fog."

"I'm not saying Enron killed him," Cathy said, "but I know that I believe he lost his will to live after that. It felt like our ship had sunk, and I could paddle, but I didn't know which direction to paddle to."

After working 10 years at Enron, Peters says she's barely paying the bills, even with two jobs.

"Did you think, at this time of your life, that you'd be working as hard as you are?" Syler asked.

"I was planning to be retired as of last summer," DefForge said. "Now, you know, it's back to square one again."

She says it doesn't stop there: Having "Enron" on her resume often means guilt-by-association.

"Getting an interview with companies, when they see Enron, I mean, they almost all just say, 'Forget it,' " she says. "Their attitude is. 'They're arrogant, so therefore, you must be, also.' "

Prestwood says his house isn't paid off yet, and he has heart disease.

His comfortable retirement is now a nightmare.

"It takes a strong person to stand against the wall, and recuperate, and come back," Prestwood says.

Peterson sold her dream home, where she lived 15 years, and moved into one that's 900 square feet. She spends her time now writing books, and counting every penny.

"We never really were rich," Peterson says, "but if I wanted to buy a can of green beans for 89 cents, I never looked to see if it was four or five cents higher. Now, I've become very creative when shopping."

And, now, all the former employees have their eyes on the Houston courtroom where Skilling and Lay could each get at least 30 years in prison if convicted.

Both claim they had no inside knowledge that Enron was in trouble. But even as the company crumbled, and workers worried about their retirement funds, Lay was giving employees a pep talk.

"Our chief had done said that this company has never been any stronger. 'Hang onto your stock!' " Prestwood said. "That is where we messed up, by hangin' on to ours, 'cause they were dumping theirs by the bucketfuls."

"I do blame the executives," Peterson says, "and I believe that their conviction will serve as a tombstone for everyone to see, marking the consequences of corporate greed."

But what if they're acquitted?

"I just can't even begin to tell you," Peters says. "I would be so upset. So upset."

"If they did get off," says Prestwood, "I'd go to my grave believing that there's something wrong with our judicial system."

But if the verdict is guilty, and the former heads of Enron head to prison, "I'll have a smile on my face from ear to ear," Prestwood says. "You know, I would think justice would be done."

Asks Peters, "To watch them being led away in handcuffs? Wow, can I have balloons and confetti? I'm gonna feel a lot of closure."

The trial is expected to last four months. These former workers say they'll be there as often as they can.