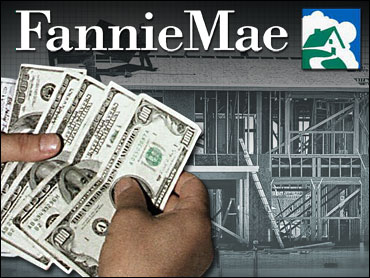 The government on Monday filed civil charges against former Fannie Mae chief Franklin Raines and the mortgage giant's former finance chief and controller, seeking fines and the return of millions in bonus money said to be tied to an improper accounting scheme.

Raines and Howard were swept out of office two years ago in the multibillion-dollar accounting scandal at the government-sponsored company, which finances one of every five home loans in the United States.

The charges "reveal how the individuals improperly manipulated earnings to maximize their bonuses, while knowingly neglecting accounting systems and internal controls, misapplying over 20 accounting principles, and misleading the regulator and the public," OFHEO Director James B. Lockhart said in a statement.

OFHEO, the regulator for Fannie Mae and Freddie Mac, its smaller sibling in the $8 trillion home-mortgage market, last May issued a blistering report alleging a six-year accounting fraud at Washington-based Fannie Mae, the second-largest U.S. financial institution after Citigroup Inc.

The regulators said the scheme included manipulations to reach quarterly earnings targets so that company executives could pocket hundreds of millions in bonuses from 1998 to 2004.

Earlier this year, the company was fined $400 million after a federal report said senior executives at Fannie Mae manipulated accounting to collect millions of dollars in undeserved bonuses and to deceive investors.

The housing oversight agency and the Securities and Exchange Commission announced a $400 million civil penalty against Fannie Mae in a settlement over the alleged accounting manipulation.

Of that amount, the $350 million assessed by the SEC — one of the largest penalties ever in an accounting fraud case — will go to compensate Fannie Mae investors damaged by the alleged violations.

The company also agreed to limit the growth of its multibillion-dollar mortgage holdings, capping them at $727 billion, and to make top-to bottom changes in its corporate culture, accounting procedures and ways of managing risk.

Thirty executives and employees at the company as well as others who have left — including Daniel Mudd, the current president and CEO — will be reviewed for possible disciplinary action or termination.