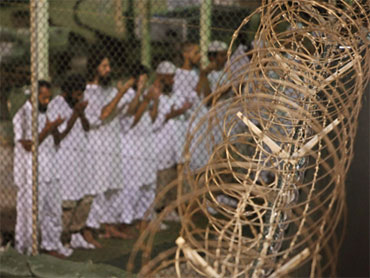 A man who was freed from Guantanamo after he claimed he only wanted to go home and help his family is now a senior commander running Taliban resistance to the U.S.-led offensive in southern Afghanistan, two senior Afghan intelligence officials say.

Abdul Qayyum is also seen as a leading candidate to be the next No. 2 in the Afghan Taliban hierarchy, said the officials, interviewed last week by The Associated Press.

The story of Abdul Qayyum could add to the complications U.S. President Barack Obama is facing in fulfilling his pledge to close the prison at Guantanamo.

U.S. intelligence says 20 percent of suspects released from the Guantanamo Bay prison have returned to the fight and that the number has been steadily increasing.

Qayyum's key aid in plotting attacks on Afghan and international forces is another former Guantanamo prisoner, said the Afghan intelligence officials as well as a former Helmand governor, Sher Mohammed Akundzada. Abdul Rauf, who told his U.S. interrogators that he had only loose connections to the Taliban, spent time in an Afghan jail before being freed last year.

He rejoined the Taliban, they said. Akundzada said he warned the authorities against releasing both him and Qayyum.

Like Qayyum, Rauf is from Helmand province in southern Afghanistan. During the Taliban's rule, which ended in 2001, Rauf was a corps commander in the western province of Herat and in the Afghan capital, Kabul, said Akhundzada.

The intelligence officials were interviewed in Helmand, where the Taliban control several districts, and spoke on condition of anonymity lest they attract the militia's attention.

They said Qayyum was given charge of the military campaign in the south about 14 months ago, soon after his release from the Afghan jail to which he had been transferred from Guantanamo. That includes managing the battle for the town of Marjah, where NATO troops are flushing out remaining militants.

Qayyum, whose Taliban nom de guerre is Qayyum Zakir, is thought to be running operations from the Pakistani border city of Quetta. A Pakistani newspaper report that he was recently arrested was denied by Abdul Razik, a former governor of Kajaki, Qayyum's home district, which is under extensive Taliban control.

One of the intelligence officials also questioned the report. He said a house Qayyum was in was raided about two weeks ago and three assistants were arrested but he escaped. A week ago he was seen in Pishin, a Pakistani border town about 50 kilometers (30 miles) from Quetta, the official said.

"He's smart and he is brutal," said Abdul Razik. "He will withdraw his soldiers to fight another day," he said, referring to the Marjah campaign.

Qayyum, who is about 36 years old, is close to the Taliban's spiritual leader, Mullah Mohammed Omar. He has been tipped as a candidate to replace the militia's second-in-command, Mullah Abdul Ghani Baradar, who was among several Taliban leaders arrested recently in Pakistan.

A Taliban commander in the 1990s who was notorious for brutality and summary executions, Qayyum was captured in the 2001 U.S.-led invasion of Afghanistan and taken to Guantanamo. Accord transcripts, he identified himself to his American captors by his father's name, Abdullah Ghulam Rasoul, and said he had been conscripted by the Taliban but left at the first opportunity.

According to a military transcript of his subsequent hearing, he said: "I want to go back home and join my family and work in my land and help my family." In December 2007 he was among 13 Afghan prisoners released to the Afghan government and held in Pul-e-Charkhi jail, on the eastern edge of the Kabul.

A year later he was set free, despite warnings that he would return to the Taliban, said Sher Mohammed Akundzada, the former governor of Helmand province, where the battle for Marjah was waged.

Afghanistan's deputy attorney general said Qayyum went before an Afghan court, which ruled he had served his time. The U.S.-backed Afghan government generally gets a promise from former Guantanamo prisoners that they won't join the armed opposition. Qayyum made no such promise.

"The court decided time served was enough," said Faqir Ahmed Faqiryar. "When the court is involved there is no need to promise anything."

Abdul Razik, who knows the family well, said he wrote to Qayyum's father warning him to keep his son under control. "He told me, 'I have no control over him.' "

Through interviews from Kabul to Helmand province, the AP traced Qayyum's steps from the Afghan prison, across the border into Pakistan, through Peshawar to Quetta, back into Afghanistan to his village of Soply, and then to Quetta again.

A loner who trusts few people, his only company was a driver known to the Taliban and who has since been arrested, Razik said.

In Soply, his native village in Helmand, Qayyum stayed for two days with his sister, according to a neighbor who saw him outside the house and was quickly warned to "say nothing." He returned to Quetta, from where he oversees four southern provinces: Helmand, Kandahar, Uruzgan and Zabul, said Sharifuddin, a former Taliban official who lives near Soply, Qayyum's village. His information was confirmed by Razik and the intelligence officials interviewed by the AP.

"From his houses in Quetta he appoints the (Taliban) governors, the district governors," Sharifuddin said. "Nothing happens in these provinces without his approval."