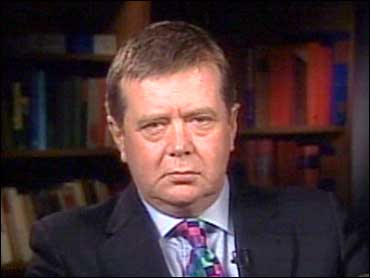 The tapes were recorded by Diana's voice coach, Peter Settelen. He had been brought in to try to convert Diana from a shy young lady into a confident princess, according to CBS News Correspondent Mark Phillips. But, Phillips says, "They seemed more marital therapy than speech therapy."

On the tapes, the princess complains that Charles only wanted sex once every three weeks. She reveals Queen Elizabeth brushed her off when she approached her for help with Charles. The Queen, Diana says, simply called Charles "hopeless." And the princess says, "It completely threw" her when Charles responded to a question when they got engaged with a cryptic comment about "whatever being in love means."

Ken Wharfe was Diana's bodyguard when the tapes were made. He tells The Early Showco-anchor Julie Chen, "What the tapes show actually is a very authentic, a very honest, sincere Diana. Very much. And it brought back some very vivid memories. But, I think that what's interesting here is, in so far as the information that I've seen, it's actually been in the public domain. So, so far, there (are no new revelations) at all in that other than we see Diana, a very authentic Diana."

But Wharfe seems suspicious of Settelen's motivies in making the tapes.

"I think what's interesting about the tapes," Wharfe tells Chen, "is he (Settelen) says he used these tapes as a form of coaching Diana in her speech, etc. But I'm not so certain that that is a practice that is used. I mean, to ask somebody like Diana to speak very, very honestly and very privately. I don't see how that in any way can improve" her speech, or speeches."

Wharfe calls it "regrettable" that Settelen is selling the tapes, but "I'm not at all surprised. I've already seen the reasons for him saying that. (He says it was) to recover costs of a legal action to get the tapes back in his possession. I mean, that's a copyright issue and a legal issue that he's won. But I think we have to look at where these tapes went in '92.

"According to Peter Settelen and others, he assumed the tapes were lost and it wasn't until the tapes were found by police on the raid in (Diana's butler) Paul Burrell's house some two years ago now, that the actual tapes re-emerged. It's interesting that from that moment on, Settelen went through a fairly lengthy legal battle to get possession of the tapes back. One has to ask the question, what would he have done, had the tapes not been found? My guess is he would have assumed, like others, that the tapes had been lost."

Wharfe pooh-poohs speculation Diana is said to voice on a soon-to-be-aired tape that the bodyguard who replaced Wharfe, Barry Manake, was "bumped off." Manake died in a motorcycle accident.

"I don't think there's any truth in that at all," Wharfe says. "For this reason: We're talking about taking somebody's life here. I think we have to be very guarded when making those sorts of statements. As an ex-police officer, I'm sort of guided by what is (available through evidence). There is no evidence to suggest that any of the agencies were involved in an attempt to kill or, for that matter, murder Barry Manake.

"Why would they wish to kill Barry Manake? There is no evidence to suggest he had a sexual relationship with the princess. He certainly had a very close relationship, but that wasn't uncommon. I was very close to the princess during my time, but one had to be very guarded and very careful. Just how far one stepped over the mark, as we say.

"In Manake's case, he certainly did overstep the mark and, as I understand it, from colleagues that I served with that knew Manake, they were keen to ensure that they didn't compromise the reputation of our department and for that reason, he was moved to other policing duties.

"Now, some months after that, he was killed in a motorcycle accident, which I'm sure is the same in America as indeed in this country, that happen only too often. So to actually try and link to that a conspiracy theory without evidence is actually quite bizarre," Wharfe concludes.