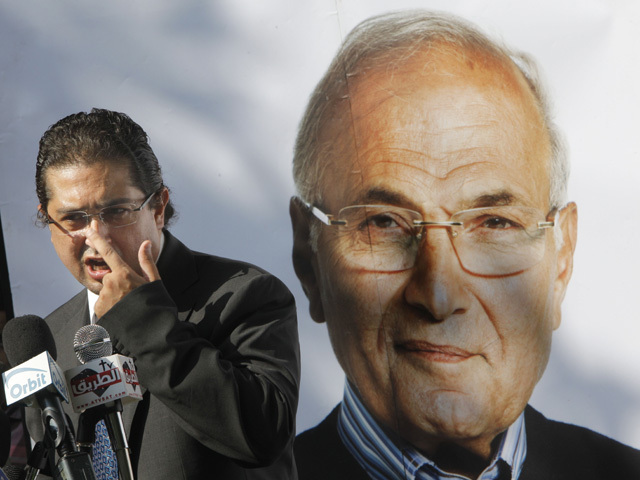 (AP) CAIRO - A campaign spokesman for Hosni Mubarak's ex-prime minister said Tuesday that Ahmed Shafiq has won Egypt's presidential election, countering the Muslim Brotherhood's claims that its candidate was the winner and setting the stage for a divisive fight for the leadership.

The rival claims potentially open a new chapter of unrest at a time when opposition already is growing against a constitutional declaration announced by the military on Sunday which robbed the next president of many powers and gave the generals who succeeded Mubarak last year legislative powers as well as control over the process of drafting a permanent constitution.

The Brotherhood is already gearing up for a confrontation with the ruling military. It has called for mass demonstrations in Cairo and elsewhere on Tuesday to protest the military's declaration, which made changes to the interim constitution, as well as a court ruling last week that dissolved parliament, where the Brotherhood controlled nearly half the seats.

The court ruling has been endorsed by the military, whose leader, Field Marshal Hussein Tantawi, issued a decree dissolving the legislature. The Brotherhood and its Islamist allies dismissed the decree, arguing the military ruler had no right to issue it less than two weeks before the scheduled transfer of power to civilians. Also last week, the military-backed government granted military police and intelligence agents the right to arrest civilians for a host of suspected crimes.

Critics have called the military's moves a "legal coup," and on Tuesday former U.S. President Jimmy Carter expressed his concerns. His Carter Center monitored the two-day election over the weekend as it has every nationwide vote in Egypt since Mubarak's ouster.

"I am deeply troubled by the undemocratic turn that Egypt's transition has taken," Carter said in a statement Tuesday.

"The dissolution of the democratically-elected parliament and the return of elements of martial law generated uncertainty about the constitutional process before the election," he said, adding that the constitutional declaration violated the military's commitment to make a full transfer of power to an elected civilian government.

"An unelected military body should not interfere in the constitution drafting process," said Carter, alluding to the military's control over the writing of the charter. Carter is a regular visitor of Egypt, where he often meets with the ruling generals and government leaders.

The official result of the presidential election vote will be announced on Thursday. With each side now insisting it won, an announcement either way by the election commission could now raise protests from the losing side.

Shafiq's campaign spokesman, Ahmed Sarhan, told a televised news conference that Shafiq won 51.5 percent of the vote and that the claim of victory by Shafiq's rival Mohammed Morsi was "false."

"Gen. Ahmed Shafiq is the next president of Egypt," said Sarhan. He said Shafiq won some 500,000 votes more than Morsi, of the fundamentalist Brotherhood.

The Shafiq campaign's claim came just hours after Morsi's campaign repeated their claims of victory, saying Morsi had won 52 percent of the vote compared to 48 by Shafiq.

The Brotherhood first announced Morsi's victory early Monday, around six hours after polls closed. It said its claim was based on returns announced by election officials from each counting center around the country. Each campaign has representatives at every center, who compile the individual returns. The Brotherhood's compilation during the first round of voting last month proved generally accurate and, when it announced its victory early on in that race, it raised no objections.

But this time, Shafiq's campaign countered quickly, saying early Monday that its ongoing count showed their man ahead. Tuesday's announcement was its first claim that it had won.

The Brotherhood was already calling supporters into the street against the military. Bu the afternoon, several thousand protesters gathered in Cairo's Tahrir Square, birthplace of the uprising that toppled Mubarak 16 months ago. The crowd was expected to be in the tens of thousands by evening, when the summer heat is expected to ease.

A handful of lawmakers made symbolic attempts to enter parliament, but were met by a locked gate and a line of anti-riot soldiers on the other side.

Spokesmen for Morsi's campaign other political groups were expected to join the rallies. April 6, one of the main revolutionary groups behind last year's uprising that toppled Hosni Mubarak's regime, confirmed it would participate.

How much others participate will be a key measure of whether the Islamist group can rally secular and leftist movements to its side.

Reacting to Morsi's victory claim, the main index of Egypt's stock market plunged for the second day running on Tuesday, adding to the woes of investors. The EGX-30 was down 4.2 percent Tuesday and 3.4 percent on Monday.