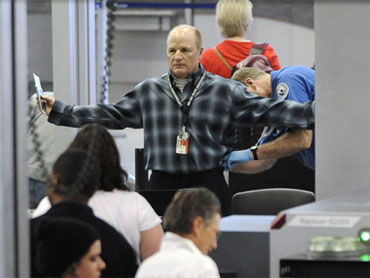 On the eve of one of the busiest travel days of the year, the Transportation Security Administration isn't backing down from its new screening procedures: full-body scans, and thorough pat-downs for those who refuse.

On Monday Homeland Security Secretary Janet Napolitano said she believes the risks outweigh any discomfort or embarrassment passengers might feel.

"Look, there is a continued threat against aviation involving those who seek to smuggle powders and gels that could be used as explosives on airplanes," she said.

The former head of the National Transportation Safety Board said today that the enhanced screening procedures for air passengers are necessary in order to prevent terrorists from succeeding in their plans.

Appearing on CBS' "The Early Show" this morning, Peter Goetz said that the Transportation Safety Administration's persistence in using full-body imaging scanners and aggressive pat-downs of travelers in the face of criticism and protest movements indicates that "the threat is real.

"I think the majority of Americans understand that al Qaeda and their minions are still focused on disrupting aviation and killing Americans. So we need to have enhanced procedures. We need to have procedures that try to outsmart the terrorists," he told anchor Maggie Rodriguez.

When asked if he believed the authorities were acting on specific but unrevealed threats, Goetz said, "I speculate about that. We know that the terrorists are focused on aviation. We know that they focus around holiday periods; they've tried to have events before. So I think there may be some specific threats that the TSA and the Homeland Security are acting on, and that these procedures are necessary."

Although the enhanced screening techniques may increase safety, it hasn't made them seem any less intrusive to some, reports CBS News correspondent Jeff Glor.

Mother Gwen Horter complained about the screening of her children. "It's just too personal, too invasive. I don't want strangers touching the boys' bodies. Yeah, I just don't think it's necessary."

Traveler Kevin Haymes also found his pat-down invasive: "At one point the agent had his hands actually in the top of my pants, my jeans, I asked for a supervisor, and got the names of the agents, and will file a complaint."

But a majority of travelers still don't seem to mind in the name of security.

"We have to do what it takes," said Mary Anne Basabe. "Let no one get us ever again."

But a web-based effort urging fliers to opt-out of the scans tomorrow, forcing extra pat-downs, might bog down travel.

The organizer of National Opt-Out Day, Brian Sodergren of Ashburn, Va., said the purpose is not to disrupt air travel on November 24, but to spotlight the unknown health risks of the full-body electromagnetic wave and backscatter X-ray scanners, and the invasive physical examinations given to those who refuse to submit to scanning.

"We have a right to privacy and buying a plane ticket should not mean that we're guilty until proven innocent," the website said.

Goetz also said he believed participation in the Wednesday protest to "opt-out" of the full body scanners, necessitating pat-downs, would not be supported by most travelers.

"I think people are smarter than that," Goetz said. "When you're traveling on holidays, the whole purpose is to get to where you're going safely and on time. Who wants to spend hours on end in an airport for simply making a point that really is kind of obscure to begin with?

"So I think the overwhelming majority of people are going to go through the check-in procedures without incident, and they're going to get to where they want to go to, on time, and safely."

Goetz's advice to travelers: "Just review what the procedures are," he said. "You know, people who don't fly very often sometimes forget what is expected of them at the check-in. Go to the website, take a look, be prepared for the check-in."

TSA also provides helpful information to holiday travelers. For those flying home for Thanksgiving, the government wants you to know that pies are allowed through the security checkpoint, but most other food items - gift baskets, cranberry sauce, gravy, maple syrup, wine - should be in your checked bag or left at home.

And don't even think about bringing a snow globe on board the plane.