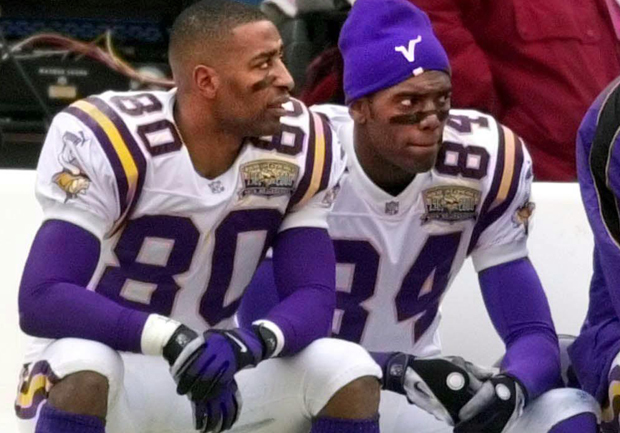 Former Vikings receiver Cris Carter admitted that he was guilty of putting up cash to put big hits on opponents as a means of protection.

"I'm guilty of it," the eight-time Pro Bowler said during a Tuesday radio appearance with Mike Hill and Mark Schlereth. "It's the first time I've ever admitted it. But I put a bounty on guys before. I put bounties on guys. And the guys tried to take me out, a guy tried to take a cheap shot on me, I put a bounty on him, right now."

Carter, now an ESPN analyst, was careful to distinguish his bounty system from the cash-for-hits scheme that has drawn multiple suspensions for Saints players and coaches. He said he never offered money to "maim or hurt the dude," and that his bounty system was "based on protection or (a) big hit, excitement or helping your team win." He said that while playing in Minnesota, bounties were offered not only to protect him but other offensive stars like Randy Moss, Daunte Culpepper and Randall Cunningham.

Carter, who has been a finalist for the Hall of Fame the past five years, said he once put a bounty on Pro Bowl linebacker Bill Romanowski as form of self defense.

"Bill Romanowski -- he told me he was going to take me out before the game, warm-ups. "No problem. [He said,] 'I'm gonna end your career, Carter.' No problem. "I put a little change on his head before the game. Protect myself. Protect my family. That's the league that I grew up in," Carter said.

The 46-year-old Carter spoke one day after Saints linebacker Jonathan Vilma appealed his season-long suspension under the NFL's bounty investigation, which named him as a ringleader of the system.

While Carter said his bounties were protective in nature, the Saints' system was allegedly more malicious. According to the league, Vilma offered $10,000 to any player who knocked out then-Cardinals QB Warner or then-Vikings QB Favre out of playoff games in 2009. The Saints went on to win their first Super Bowl that year.