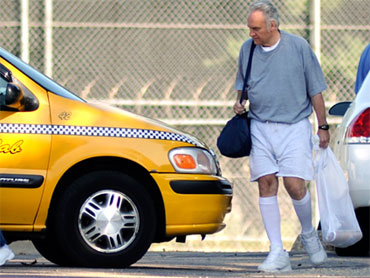 Former Ohio Rep. James Traficant walked out of a Minnesota prison Wednesday morning after serving a seven-year sentence for bribery and racketeering.

The nine-term Democrat from Youngstown left the Federal Medical Center in Rochester and stepped into a waiting cab.

He faces three years of probation. He hasn't said whether he will retire or try to return to public life.

Traficant, 68, was one of Congress' most colorful members, known for his hair and his penchant for Star Trek references, including brief floor speeches typically punctuated with the phrase, "Beam me up."

He was convicted in a raucous trial in 2002 of bribery and racketeering for accepting bribes from businessmen and taking kickbacks from staff members. He then was expelled from Congress, only the second House member since the Civil War to be ousted for unethical conduct.

Traficant was transferred in 2004 to the Rochester facility, which provides specialized medical services to inmates.

His three years of probation will include a requirement to report regularly to a probation officer, be subject to unannounced home visits and get permission before traveling outside northern Ohio.

Economically depressed Youngstown was a beneficiary of Traficant's time in Congress, but it wasn't clear what kind of reception he would get.

Some residents planned a welcoming party for Traficant's return, selling $20 tickets for a bash with a suggested dress code of skinny ties, denim suits and bell-bottom pants - all part of his trademark style.