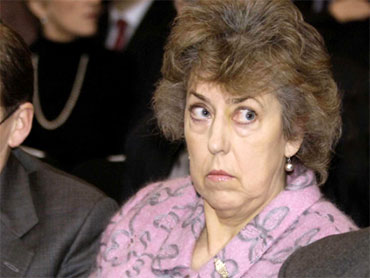 United States intelligence agencies misled key allies, including Britain, about the mistreatment of suspected terrorists, according to the former head of the country's domestic spy agency, MI5.

Eliza Manningham-Buller, who retired in 2007 and is now a member of the House of Lords, said Tuesday that the U.S. deliberately suppressed details of its harsh handling of some detainees, including accused 9/11 mastermind Khalid Sheikh Mohammed.

"The Americans were very keen that people like us did not discover what they were doing," Manningham-Buller told a meeting at Britain's Parliament.

Britain's spy agencies have come under heavy criticism for their alleged collusion in the torture overseas of terrorist suspects, including detainees held in U.S. custody.

In a recent court ruling, one of Britain's most senior judges questioned MI5's record on human rights and claimed the agency may have misled Parliament and the courts about how much it knew about mistreatment.

Manningham-Buller said that in 2002 or 2003 she questioned how the U.S. was able to supply Britain with intelligence gleaned from Sheikh Mohammed.

"I said to my staff, 'Why is he talking?' because our experience of Irish prisoners, Irish terrorists, was that they never said anything," she said.

"They said, well, the Americans say he is very proud of his achievements when questioned about it. It wasn't actually until after I retired that I read that, in fact, he had been water boarded 160 times," Manningham-Buller said.

She said the "Americans were very keen to conceal from us what was happening, as they were from many of their own people."

Manningham-Buller spent 33 years in British intelligence, and was head of MI5 between 2002 and 2007.

She said that, during that time, Britain's government complained to the U.S. about its treatment of detainees, but declined to offer details. "The government did lodge protests and I'm not going to say any more on that," Manningham-Buller said.

She said British spies are proud to be quietly effective, unlike the gung-ho U.K. intelligence officers portrayed in TV dramas. But she joked that members of U.S. President George W. Bush's administration, including Vice President Dick Cheney and Defense Secretary Donald Rumsfeld, may have been inspired by on-screen excess.

"One of the sad things is Cheney, Rumsfeld and Bush all watched '24,"' Manningham-Buller said, referring to the popular TV show about a counter-terrorist agent.

Last month, Master of the Rolls David Neuberger, a senior judge, said MI5's insistence in a court case that it was unaware of the harsh treatment of some detainees held overseas in CIA custody was unreliable.

The ex-spy chief confirmed Tuesday that Britain was aware of mistreatment cases before she left office.

In an original draft of a ruling, Neuberger also criticized MI5's supposed lax attitude toward the mistreatment of detainees.

Manningham-Buller's successor, current MI5 director Jonathan Evans, has rejected the claims, and warned that the courts risk being exploited by those seeking to undermine British counterterrorism work.

The ex-chief said she believes that the allegations of complicity in torture could disrupt the work of MI5 staff.

"The allegations of collusion in torture and the lack of respect for human rights will wound those individuals personally and collectively, and in some respects - whether proven or not - it will make it harder for them to do their jobs," she said.

Police are investigating whether one MI5 officer - known as Witness B - is guilty of criminal wrongdoing regarding the alleged torture of an ex-Guantanamo Bay detainee. In a separate case, the actions of an MI6 officer are also being investigated.

Britain's government also faces 12 legal cases mounted by former detainees who claim the U.K. was complicit in their alleged torture.