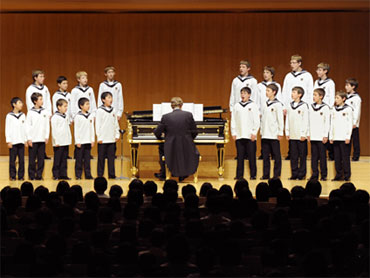 Two former members of the famed Vienna Boys' Choir say they were sexually abused by their supervisors, a top Austrian newspaper reported, as allegations of misconduct against children in Austria spread beyond the Roman Catholic Church.

The Der Standard daily reported on its Web site Thursday that the allegation was made by two unnamed members of the group - both now adults.

One of the Austrian victims, a 33-year-old who now lives in Berlin, was cited as saying he and others were pressured to wash their genitals in the shower while supervisors watched. He also said an older choir member forced him to perform oral sex at one point while he was a member of the choir from 1985 to 1987.

Another member, described as a 51-year-old psychologist living in Munich who sang with group between 1966 and 1970, said a choir master rested his hand on his thigh for two hours while on a bus tour.

The Vienna Boys' Choir is not church-affiliated, but many boys live in dormitories while singing away from their families.

The newspaper cited choir officials as saying the allegations would be investigated.

The story follows a string of abuse allegations in Austria. It surfaced just hours after Catholic Church officials announced that three priests had been relieved of their clerical duties because of allegations of sexual misconduct with minors, and after one admitted to carrying out the acts of which he is accused.

On Wednesday, a priest in the eastern Austrian province of Burgenland resigned after a report surfaced alleging that he sexually abused or molested up to 20 children and youths in the 1970s and 1980s.

Earlier this week, the head of a Benedictine monastery in Salzburg admitted to sexually abusing a minor four decades ago and resigned.

Founded in 1498, the Vienna Boys' Choir today includes about 100 choristers between the ages of ten and fourteen, divided into four touring choirs. The four choirs give around 300 concerts and performances each year in front of almost half a million people.

Another boys choir, Germany's Regensburger Domspatzen, has this week been at the center of a physical abuse scandal. The choir was run for 30 years by Pope Benedict XVI's brother, the Rev. Georg Ratzinger, who this week acknowledged slapping students and apologized for being told about beatings and doing nothing to stop them.

Germany's top education representative, Ludwig Spaenle, said Thursday the church failed to report cases of physical and sexual abuse across the country in a timely fashion. At least 170 former students from Catholic schools have come forward with claims of sexual abuse and others have spoken of physical abuse.