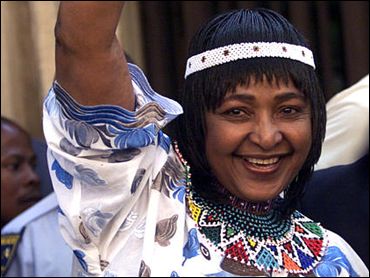 A British newspaper interview that quotes Nelson Mandela's ex-wife bitterly criticizing the 92-year-old anti-apartheid icon as having "let us down" prompted outrage Wednesday in South Africa.

Winnie Madikizela-Mandela also said she could not forgive Mandela for accepting the Nobel Peace Prize in 1993 alongside F.W. De Klerk, the white president who released him and went on to participate in negotiations that ended apartheid, according to Tuesday's Evening Standard.

"He agreed to a bad deal for the blacks. Economically, we are still on the outside. The economy is very much 'white.' It has a few token blacks, but so many who gave their life in the struggle have died unrewarded," Madikizela-Mandela is quoted as saying.

The Star newspaper in Johannesburg accused Madikizela-Mandela of unleashing a "rant."

The governing African National Congress said it would not comment until its leaders could discuss the article with Madikizela-Mandela, who was traveling abroad Wednesday.

Mandela is revered by blacks and whites in South Africa, but is not above criticism. The most common are complaints that he devoted too much time during his 1994-99 presidency to seeking reconciliation with whites and too little to uplifting blacks mired in poverty by apartheid.

Yet Madikizela-Mandela's comments contrast sharply with those she made only last month at a forum marking the 20th anniversary of his release from prison. She said then that Mandela was loved and recognized around the world for his fearlessness, and that he had emerged from prison still committed to revolution.

The contrast prompted the Johannesburg newspaper The Times to accuse her of having "two faces."

After a series of scandals over violence and fraud, Madikizela-Mandela also has regained prominence in the ANC, where she is embraced in particular by young members impatient with the slow pace of change since apartheid ended in 1994. After internal party voting, she was high on the ANC's list of candidates in last year's elections, and sits in parliament.

In the interview, Madikizela-Mandela is quoted as accusing the current ANC leadership of exploiting Mandela's image while sidelining him as a leader, and accusing his foundations of using him to raise money.

Mandela is largely retired now, with several foundations led by the Nelson Mandela Foundation carrying out his work. In February, Madikizela-Mandela called the foundations "a lasting tribute to his legacy."

The Nelson Mandela Foundation did not respond to requests for comment Wednesday.

The Standard article also quotes Madikizela-Mandela as criticizing South Africa's Truth and Reconciliation Commission, which was an attempt to address the horrors of apartheid without pursuing retribution. In the interview, she calls its leader, Nobel Peace laureate Desmond Tutu, a "cretin." Tutu, through his office, refused comment Wednesday.

The Evening Standard interview was with Nadira Naipaul, wife of Nobel literature laureate V.S. Naipaul. In the Standard article, Nadira Naipaul said she and her husband were touring Africa when they met Madikizela-Mandela in her mansion in Soweto. They were in South Africa last year.