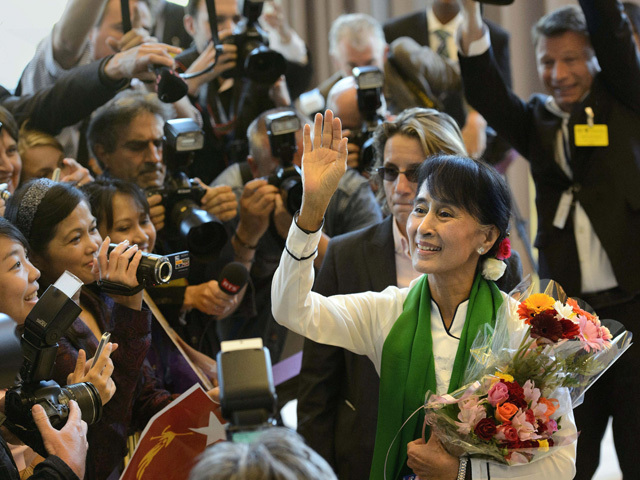 (AP) BERN, Switzerland - A rock star welcome greeted Aung San Suu Kyi as she embarked on her first trip to Europe in 24 years. But after a whirlwind of standing ovations, speeches and receptions, it all became too much, and she fell ill Thursday during a news conference in Switzerland.

The 66-year-old Nobel Peace Prize laureate became sick shortly after saying how exhausted she was after her long trip from Asia to Europe, which brought her to Geneva late Wednesday night. It was not known how her apparent exhaustion would affect the rest of a tightly-packed schedule, which includes delivering her Nobel Peace Prize acceptance speech in Oslo on Saturday, 21 years after winning the award.

Suu Kyi looked pale as she took questions Thursday evening alongside Foreign Minister Didier Burkhalter in the Swiss capital of Bern. After a few minutes, she pressed a finger to her lips and motioned to an aide who rushed to her side with a bag. She then bent over and threw up before being escorted out of the room by officials.

A spokesman for the Swiss Foreign Ministry said Suu Kyi recovered enough to briefly attend a reception with government officials later but then retired to her room.

"She's just a bit tired," spokesman Jean-Marc Crevoisier told The Associated Press. "I would be, too, after the long day she's had."

Earlier, the woman who has become an icon for the democracy movement had blamed age and lack of travel for her tiredness.

"Having stayed in one place for so long, I found the plane journey out to the West extremely exhausting and a little bit disorienting because I couldn't adjust to the new time as quickly as I might have 24 years ago," Suu Kyi told reporters. "It may, of course, have something to do with age. It may have to do with lack of practice."

The United Nations in Geneva was the first stop of her two-week European tour. Her appearance at a U.N. labor conference — an unlikely venue for glitz and glamor — had starry-eyed functionaries reaching for their camera phones to snap a picture as Suu Kyi smiled and shook hands with well-wishers.

"You fill this room with the light of your spirit," said Juan Somavia, the ILO's director general.

The evening before, as Suu Kyi arrived at her hotel shortly before midnight after a long flight, spontaneous applause erupted in the lobby as the staff recognized their special guest.

Suu Kyi, who endured 15 years of house arrest and once feared permanent exile if she ever left Burma (also known as Myanmar), has become the country's most electric ambassador.

During this trip, Suu Kyi is expected to lay out how her country has changed and what still needs to be done before it can be called a proper democracy. She also had planned to address both houses of Britain's parliament, receive an honorary doctorate from Oxford, attend a U2 concert in Dublin, and deliver in Oslo the acceptance speech for the Nobel Peace Prize that she won in 1991.

At that time, Suu Kyi was detained by the military after leading a pro-democracy party to victory in Burma's 1990 election. The prize was picked up instead by her 18-year-old son Alexander.

"I've been so exhausted preparing for the trip that I've had no time to think about how I'm going to feel about Oslo, but perhaps this evening I'll sit back and think about it," Suu Kyi told reporters after her speech to the U.N. labor office.

The Geneva-based agency has long campaigned against forced labor in Burma, earning it a first stop on Suu Kyi's much-anticipated tour.

The leader of Burma's opposition National League for Democracy stepped carefully around sensitive subjects such as the ethnic unrest brewing in her country's western Rakhine province.

She said foreign investment must help — not hurt — Burma's goal of moving toward full democracy, referring to the exploitation of Burma's oil and gas riches, the subject of recent deals between the government and China. Western companies, too, have been eager to invest in the Southeast Asian nation as the sanctions it faced under military rule are gradually lifted.

"Any new investment that comes in because of the lifting or suspension of sanctions should add to the democratic process rather than subtract from it," Suu Kyi said.

"At this moment, what I want most of all is reconciliation and not retribution," she said.

She took the same high road when it came to her own suffering at the hands of the military, which barred her British husband from visiting her in Burma as he was dying from cancer.

"In some ways I don't think they really did anything to me," she said. "I do not think I have anything to forgive them for."