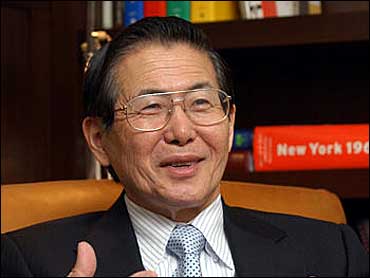 Alberto Fujimori peers into his laptop computer, quietly plotting a return to power half a world away — all but oblivious to being a wanted man who can't leave the confines of Japan for fear of arrest.

The disgraced former president of Peru downloads public opinion polls, news reports and even an audio clip from a Peruvian radio commentator that all testify, he says, to a mounting mandate for his return.

"I'm in the process of preparation — preparation to re-enter the political world in Peru," Fujimori told The Associated Press in his fullest interview since settling in Japan, his parents' homeland.

Fujimori, who resigned in November 2000 amid a corruption scandal, hardly seems bothered that in Peru he is wanted on charges of murder, embezzlement and treason.

Even as the noose tightens on his Tokyo safe haven with a fresh international arrest warrant and a summons from Japanese prosecutors, the silver-haired 64-year-old Fujimori is insistent that he's a serious rival to his political foes back home.

"I represent a real political force. They want to eliminate that," he said, reclining in a crisp navy suit at a ritzy rooftop social club for Tokyo's elite. "I will return in an active role ... The recuperation has been even quicker than I expected."

During his 10-year presidency, Fujimori was credited with shoring up a broken economy, crushing a leftist rebel movement and attracting foreign investment. But he is now accused of doing this through corruption and death squads. Peru wants him extradited to face charges tied to his once-feared spy chief, Vladimiro Montesinos, who is now in jail, and hundreds of other underlings.

In Japan, Fujimori lives like a celebrity. Active on the lecture circuit, he gets donations meticulously wrapped in festive Japanese envelopes. He chats amiably with police officials who respect his tough anti-terrorism tactics. He lives with his young, well-heeled girlfriend, Satomi Kataoka, among elegant Japanese-style gardens of a hotel she owns in a Tokyo suburb.

Fujimori's take-charge attitude is admired by many Japanese who blame their own country's crippling economic slowdown on vacillating leaders. As the first person of Japanese descent to lead a foreign country, he appears to his Japanese admirers as a strong-willed outsider, yet one of their own.

"He found great success as an Asian in a world of white people. I think he is a tremendous leader," said Nobuo Kimoto, a politician in Ibaraki prefecture just north of Tokyo.

Invitations stream in for Fujimori to give lectures, such as one in May at an 800-person event in southern Japan where attendees paid minimum "donations" of $85 to the organizing group. It's unclear what cut Fujimori gets, if any. He refuses to say how he supports himself.

But he may be wearing out his welcome here.

A few weeks ago, Tokyo prosecutors, acting on a request from Peru, summoned Fujimori for questioning about his part in a 1997 hostage standoff in Lima during which rebels were allegedly executed by military commandos.

A demand for Fujimori's arrest from international police authorities has been at National Police Agency's headquarters since March. A 600-page extradition request from Peru, delayed for the past year by translation, is expected to reach Japan's Justice Ministry soon.

Human rights campaigners have been lobbying politicians, the national bar association and the general public to pressure Japan's government into handing him over.

As the son of Japanese immigrants to Peru, Fujimori was granted citizenship soon after he arrived. So far, the government maintains he cannot be handed over to Peruvian authorities because Japan has no extradition treaty with Peru.

Fujimori predicts the government will find insufficient grounds for extradition. "They're not going to find a single sustained accusation," he said.

He said he is "100 percent focused on Peru" and spends hours digesting reams of political data. He trumpeted a March survey by the University of Lima that found a 41 percent approval rating for his 10-year administration — nearly four times higher than President Alejandro Toledo's.

Experts say the wild card could be Toledo's administration, rocked by mounting protests from disgruntled workers and a recent hostage crisis that sparked fears of a resurgence of terrorism.

"If I were one of his political opponents, I'd be absolutely scared to death," said David Scott Palmer, a political science professor at Boston University who has written extensively about Peru.