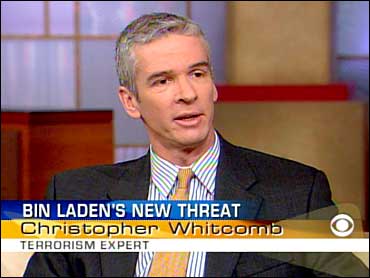 At least one terrorism expert doesn't seem all that alarmed about the audiotape from Osama bin Laden that surfaced Thursday.

Author and former FBI terrorism investigator Christopher Whitcomb says, "I don't think there's very much significance in this tape at all. And the reason is, we've seen so many of these in the past four-and-a-half years. Osama bin laden is trying to show the world he's still relevant. I think he's not still relevant, and I think he is trying just to say, 'I'm out here, look at me.' "

tells
The Early Show co-anchor Harry Smith, "When you talk to people who actually this for a living, I'm talking people in the FBI, the CIA, homeland security, they will tell you that we have no information on any money they have anywhere. We've strategically disrupted their ability to recruit, to raise money and to funnel that money and to communicate with each other around the world. Al Qaeda is not the group that most people assume it is. They don't have a boardroom someplace where they sit around coming up with schemes."Michael Scheuer, who created the CIA unit that has been trying to find Osama bin Laden, sees things very differently. Watch Bob Schieffer's interview of Scheuer by
clicking here
.Whitcomb pointed out that, "Every time you hear someone talk about al Qaeda, they will say al Qaeda influence, al Qaeda-related groups. They will not say al Qaeda because these groups (concur) somehow with the ideology of al Qaeda and want to attack based on that motive. But they don't have a specific tie to them."

Asked by Smith if this is just "a vanity statement on (bin Laden's) part saying, "I'm still here. I'm still in charge,' Whitcomb replied, "I think it is, exactly. It gets everyone to talk about him and gets everyone to say this very strong symbol, arguably the best known face in the world, is still out there. I think that's exactly what he's trying to do."

Still, bin Laden's threat that new attacks inside the United States are being planned can't be dismissed, says Whitcomb: "We can't ignore the threat. There's no doubt about it. But we live in a country of almost 300 million people, borders open all the way around. We've done extraordinary things since 9-11 to try to mitigate the threat. But it still exists. We can't overstate that we need to remain vigilant. But then you look at the reality of this situation, al Qaeda is not as effective as it was."

Whitcomb also says bin Laden's offer in the tape of a truce with the U.S. is another sign of his weakness.