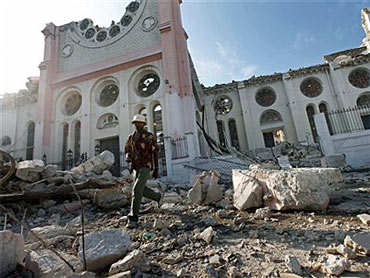 Haiti can expect more aftershocks in coming weeks, and while the usual pattern suggests they will become weaker and less frequent, another one as strong as Wednesday's jolt is certainly possible, scientists say.

The battered nation has felt more than 40 significant aftershocks since the Jan. 12 quake, with Wednesday's temblor the strongest. Originally estimated at magnitude 6.1, Wednesday's aftershock was later revised to a 5.9.

Wails of terror rose from frightened survivors as the earth shuddered at 6:03 a.m. Wednesday. U.S. soldiers and tent city refugees alike raced for open ground, and clouds of dust rose in the capital.

These events are a sign the land is adjusting to "the new reality of the rock layers," said Bruce Pressgrave, a geophysicist with the U.S. Geological Survey.

Eric Calais of Purdue University, who has studied earthquake potential in the region, said aftershocks could continue for several weeks and that another jolt as strong as Wednesday's would not be surprising.

"They will be less and less frequent, but large ones can still strike," he said. So buildings are still at risk, especially those already weakened, he said.

Julie Dutton, a USGS geophysicist, agreed that more aftershocks are probable and that another event like Wednesday's was certainly possible. "More likely we see that the earthquakes decrease in size, but you definitely have the potential that you can have a larger earthquake," she said.

Paul Mann of the University of Texas said it's hard to predict whether another sizable quake is in the future, since "we are dealing with a natural system that is very complex." 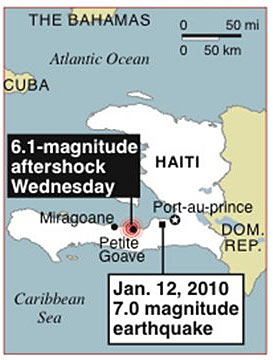 (AP)
Calais also said the fault zone responsible for last week's quake extends into the neighboring nation, the Dominican Republic. It's "somewhat of a concern to us" that that the Haiti quake may have raised the chances for a quake there. The two countries share the island of Hispaniola.

Left: A map of where Wednesday's earthquake was felt.)

But scientists don't know enough to make any forecasts, he said. "There is so much uncertainty," Calais said. "At this point we're working really hard to understand last week's earthquake, and from there we can perhaps understand what might happen next."

Mann said Haiti's disaster should not raise the risk of earthquakes throughout the wider Caribbean region. The area is seismically active anyway, he said, and people who feel a temblor shouldn't assume it's a reaction to last week's Haiti quake.

For people living well away from Haiti, such as in Trinidad, Venezuela, Colombia or Central America, "I don't think they should be fearful that the Haiti earthquake is going to activate a fault in their own back yard," Mann said.

In Port-au-Prince Wednesday, two women were pulled from a destroyed university building. And near midnight Tuesday, a smiling and singing 26-year-old Lozama Hotteline was carried to safety from a collapsed store in the Petionville neighborhood by the French aid group Rescuers Without Borders.

Also, a 69-year-old ardent Roman Catholic who said she prayed constantly during her week under the rubble and two children were saved by a New York rescue team.

CBS News "Early Show" co-anchor Harry Smith recently visited one camp where some survivors have gathered. Smith marveled at the sprit of the people faced with constant devastation in the quake's aftermath.