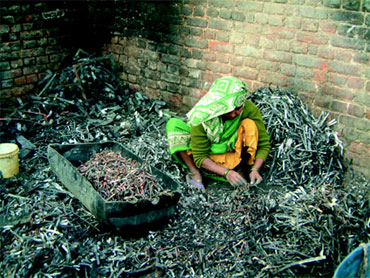 An environmental group warned Tuesday that India was fast becoming a dumping ground for electronic waste and asked the government to frame stringent laws to control illegal trade and its recycling.

India generates up to 385,800 tons of electronic waste every year - equal to 110 million laptops- and imports another 55,100 tons, mostly illegally under the pretext of metal scrap and secondhand electrical appliances, said the Center For Science And Environment.

The draft laws covered only big investment companies that account for only 10 percent of the recycling of electronic waste in the country, Bhushan said.

The Environment Ministry spokeswoman was not immediately available for comment.

Bhushan also said the developed countries were using free trade agreements to export their wastes to countries like India to avoid the cost of disposing of them.

He listed some of the hazards faced by thousands of workers in the Indian industry: Extracting lead could damage their kidneys and reproductive health while plastic found in circuit boards could harm the immune system; chromium removed from metal plates in computers could damage liver and kidneys.