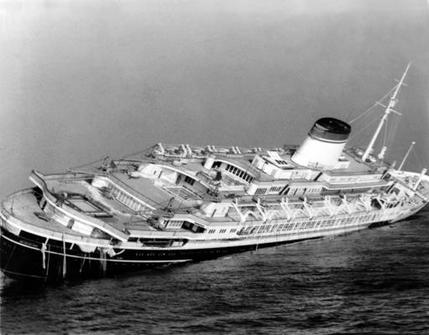 BOSTON -- Nearly six decades after 46 people died when the Andrea Doria sank to the sea floor following a violent collision with another ocean liner south of Nantucket, Massachusetts, explorers are preparing to do what 16 people have lost their lives attempting: get a good look at the wreckage.

A Washington state-based ocean exploration company is planning the first manned submersible expedition to the wreck in 20 years.

Everett, Washington-based OceanGate will use its five-man submersible Cyclops I next month to get high-definition video and 3-D sonar images of the shipwreck, technology never before used to study one of the nation's most famous maritime disasters.

"The Andrea Doria stands out as the premier shipwreck in American waters," said Stockton Rush, the company's co-founder and chief executive officer.

The New York-bound Italian luxury liner sank after a collision on the foggy night of July 25, 1956, with the Swedish ship Stockholm, which was heading back to Europe. The Stockholm ripped a gash in the Andrea Doria's hull, causing it to list and making some of its lifeboats unusable. Five people on the Stockholm died, but 46 crew and passengers on the Italian ship perished. More than 1,600 others were rescued as the ship took 11 hours to sink.

The wreck, in about 240 feet of water 50 miles south of Nantucket, has for years attracted treasure-hunting divers looking for money, china and other artifacts from a bygone era. But 16 of those divers have died, the most recent just last year.

The wreck has been compared to Mount Everest, because as alluring and dangerous as the world's tallest peak is to mountaineers, the Andrea Doria is to divers.

"A big part of the danger is the depth and the risk of nitrogen narcosis," said OceanGate marketing director Joel Perry, a condition in which too much nitrogen builds up in the blood, clouding judgment. Visibility at that depth is poor, currents are unpredictable and plenty of protrusions can snag a diver, he said.

Because of its depth, divers can only spend about 20 minutes exploring the wreck. The Cyclops I, with an interior about the size of a Chevrolet Suburban, can stay down for hours.

The plan is to do two three-hour dives per day during the weeklong expedition. The June 2-9 mission is to document and observe, not collect artifacts.

"The Andrea Doria is rapidly decaying, and using this technology we can build a 3-D map of the wreck with very high accuracy that scientists can use to compare with future decay," Rush said.

The findings, in turn, could be applied in studies of other shipwrecks.

"There's a great scientific need for data on thousands of wrecks all over the world," he said.